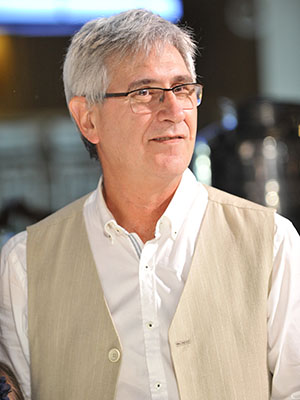 Nathan Cherny was born in Melbourne, Australia in 1958, where he was raised and educated. He studied medicine at Monash University Medical School where he graduated in 1983.  He completed his Fellowship of the Royal Australian College of Physicians attaining specialist recognition in Medical  Oncology. During that time he established the undergraduate training program in palliative care at Monash University. He subsequently  he completed a fellowship in Cancer Pain and Palliative Medicine at Memorial Sloan Kettering Cancer Center, New York, where he worked with Kathleen Foley and Russell Portenoy.

In 1994 Dr Cherny joined with Prof Raphael Catane to establish the Oncology and Palliative Medicine Unit at the Shaare Zedek Hospital in Jerusalem. He continues to head the Multidisciplinary Cancer Pain and Palliative Medicine Service at Shaare Zedek Medical Center, and, in addition, he maintains an active practice in general oncology. The model and standards for integrated oncology and palliative care developed by Prof Cherny and Prof Catane have since served as the basis for the designation criteria for the ESMO Designated Center program in Integrated Oncology and Palliative Care.

He led the ESMO initiative to develop policies on the role of the oncologist in palliative care, oncology training for medical oncologists and minimal standards for palliative care in cancer centers. 2008-2014 he served as the chairman or the ESMO Palliative Care Working Group. During that time he led the working group policy and research initiatives including:

Most recently he initiated the ESMO project to develop a magnitude of clinical benefit scale, and has served as member of the ESMO working group addressing this issue culminating in its  publication in May 2015.

Prof Cherny has been an active member of the Middle East Cancer Consortium and works closely with Palestinian oncology colleagues. He runs a mentorship program for Palestinian oncologists from the West Bank and for the Al-sadeel Palliative Care Society in Bethlehem.

Prof Cherny has had diverse research interests including opioid responsiveness of neuropathic pain, opioid rotation, opioid side effects and their management, cancer pain syndromes, suffering, palliative sedation, communication issues in oncology and palliative care, bioethics and public health.  He teaches in the Hebrew University Medical School and runs courses in communication and palliative medicine. Prof Cherny has edited five books and has published over 120 peer reviewed papers and has made numerous invited lectures in the US, Europe , Asia and Australia.

In 2007 he was appointed to the Norman Levan Chair of Humanistic Medicine at Shaare Zedek Medical Center and in 2008 was promoted to Associate Professor in Medicine in the Ben Gurion University of the Negev.  On 2015 re received ESMO (European Society of Medical Oncology) Award for his contributions to the development of oncology in Europe  and in 2016 re was the recipient of the EAPC/EJPC (European Association  of Palliative Care/ European Journal  of Palliative Care)   Palliative Care Policy Development Award

Prof Cherny is married (to Nancy) with four children (Gil, Eitan, Noa and Calanit). He lives in the town of Maccabim, in central Israel.