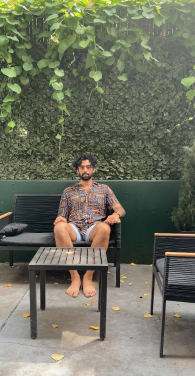 The city that never sleeps is taking a bit of a nap, but it still continues to move.

My name is Karan Rathod, a 2014 graduate from Monash University in Melbourne, where I learned a lot about Finance and Econometrics. Early on, I'd set my compass to live overseas at some point in the near future, but I would never have guessed that I’d be hunkered down in a cozy New York City apartment, under quarantine in the global epicenter of the COVID-19 pandemic, and in the midst of history-defining protests for the Black Lives Matter movement.

New York City has sent my sensory system into overdrive, and it’s in a particularly high gear right now. The city feels vulnerable, with uncertainty around the coronavirus and when things will go back to the way they once were. Extreme emotion also trickles throughout from the injustice in the Black community, where thousands of New Yorkers have taken to the streets to protest.

I’ve spent my time here leading the global Artificial Intelligence strategy at S&P Global after some time in the world of New York finance, but like most New Yorkers, I have a few “side hustles”. The incredible access this city brings has helped me continue to do what means most to me – educate people, but in a way that I never expected by becoming a filmmaker.

After attending film school on weekends, I’ve started producing documentaries, including one on refugee and asylum seeker musicians, focusing on the impact music has had on their lives and through that, sharing their journeys and experiences. This quiet time has also allowed me to chip away at a novel I’ve been writing for a few years.

Despite the city being on pause and millions of people affected drastically, I’ve been amazed at its mindset to continue to move forward, as New York does best.