Join us this Remembrance Day for the launch of - World War One: A History in 100 Stories - a path-breaking social history written by Monash historians Professor Bruce Scates...

Join us this Remembrance Day for the launch of - World War One: A History in 100 Stories - a path-breaking social history written by Monash historians Professor Bruce Scates (BA(Hons) 1980, PhDArts 1995), Rebecca Wheatley (MComm&MediaSt 2009) and Laura James.

The launch at Melbourne Museum will include a public lecture by American historian and world renowned scholar, Professor Jay Winter, the Charles J. Stille Professor of History at Yale University and expert on World War I and its impact on the 20th century.

Drawn from a unique collection of sources including repatriation files, World War One: A History in 100 Stories reveals a broken and suffering generation – gentle men driven to violence, mothers sent insane with grief, the hopelessness of rehabilitation and the quiet, pervasive sadness of loss. They also retrieve a fragile kind of courage from the pain and devastation of a conflict that changed the world.

The book, described as an “unflinching and remarkable social history”, has taken inspiration from the successful Monash/Future Learn Massive Open Online Course (MOOC) on the memory of the Great War which, due to demand, is being made available for the second time this year.

Professor Bruce Scates, Professor of History and Australian Studies, and Director of the National Centre for Australian Studies at Monash, said the book remembered not just the men and women who lost their lives in WWI but those who returned home as well.

“There were so many who returned home irreparably damaged by war,” Professor Scates said.

“The stories we mostly hear during the Centenary are the comforting and heroic ones, stories that sometimes sanitise or diminish the true cost of war”.

“It’s time we sought out new narratives, stories that are challenging and confronting.  For the gassed, the blind, the crippled and insane, and the families and communities who cared for them, the fighting didn’t end in 1918.”

The launch of World War One: A History in 100 Stories will be held at Melbourne Museum from 6pm, Wednesday 11 November. This is a free event with refreshments provided. To reserve your place at the event email ncas.enquiries@monash.edu 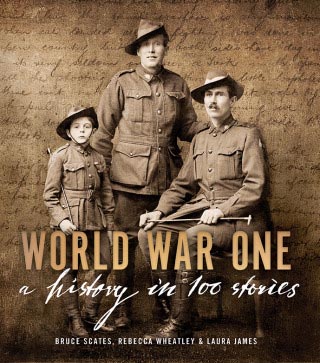 Monash alumnus Professor Bruce Scates is an award-winning teacher, novelist and historian. His publications include Return to Gallipoli, A New Australia, the Cambridge History of the Shrine of Remembrance and the recently republished Women and the Great War (co authored with Professor Raelene Frances).

Professor Scates is committed to communicating history to the widest possible audience; he played a leading role in the production of the recent ABC mini series The War that Changed Us. He was also featured in an ABC Compass program exploring pilgrimages to the cemeteries of the Great War. His work is distinctive because of his accessible prose and engaging narrative as well as academic rigour.

Monash alumna Rebecca Wheatley is a PhD candidate at the National Centre for Australian Studies at Monash University. Rebecca's research explores the teaching of Anzac and Australia's war history as a pedagogical, political and historical issue over the last century and in contemporary Australia. Rebecca is a contributing author to The Cambridge History of the First World War and Anzac Journeys: Returning to the Battlefields of World War Two. In 2015, Rebecca accompanied the Victorian Premier's Spirit of Anzac Prize group across Gallipoli and the Western Front as the Tour Historian.

Laura James is a PhD candidate with the National Centre for Australian Studies at Monash University. Laura's research is focused on war and remembrance in regional Australia, looking at how the experience of warfare and conflict has impacted regional communities and how remembrance and commemoration of war has changed and developed over time. Laura is also a contributing editor to the forthcoming publication Battlefield Events: Landscape, Commemoration and Heritage.