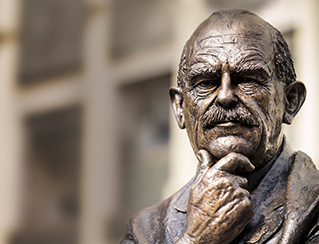 Noted Monash alumnus, Michael Headberry, is helping to lead the charge to get the University’s namesake, General Sir John Monash, the recognition he deserves. Michael is Director of the Saluting Monash Council Victoria branch.

The council’s goal is to have Sir John posthumously promoted to the rank of Field Marshal, the highest military rank that can be bestowed by Commonwealth governments on their senior soldiers. Other members of the Council include Monash Professor Roland Perry OAM and the Honourable Tim Fischer  AC.

Despite receiving the highest military decorations from the United Kingdom, France, Belgium and the United States of America, Sir John was never formally recognised with the equivalent military award from his own country.

As the Field Commander of the Australian Army Corps, he was in charge of up to 208,000 personnel, the largest Corps in the war, and had command responsibility for personnel from Australia, Great Britain, the United States and Canada.

As historians now report, Sir John Monash was considered the most astounding General in World War One; his plans and strategies for the 1918 offensives at Hamel and the Battles of Amiens, Chuignes, and Mont St Quentin, revolutionised military planning, and played an integral role in the surrender of  Germany and the Armistice.

In addition to his military service, he went on to found the State Electricity Commission of Victoria which had responsibility for providing electricity to the state and was also appointed Vice-Chancellor of the University of Melbourne.

Along with the University being named in his honour, in 2015 a statue of Sir John was erected at the Clayton campus following a fundraising campaign by the Monash Pioneers, an alumni group chaired by Michael whose members were part of the University’s first intakes from 1961 to 1965. The statue  serves to recognise both his military and civilian achievements and educate current students on his deeds.

Sir John’s life motto is now a central theme for students studying at Monash University: “equip yourself for life, not solely for your own benefit but for the benefit of the whole community.”

Your support for the campaign is requested. Please visit the Saluting Monash Council website to find out how you can help.