Alumni pick up awards across the globe

Monash University and our alumni community continue to be recognised for their outstanding achievements. Here are some of the latest highlights. 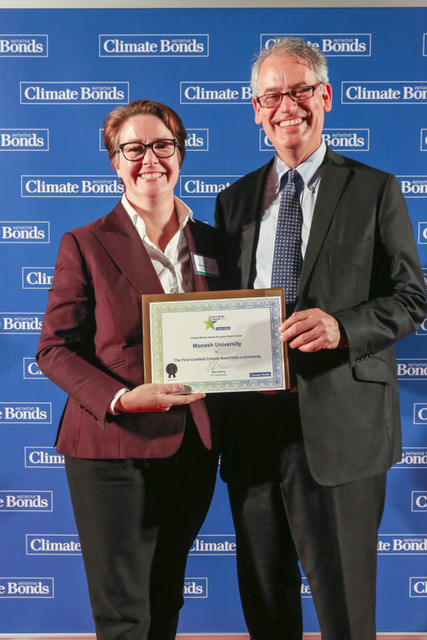 In December 2016, Monash University became the first university in the world to raise funds by issuing a climate bond. In April 2017, Monash was presented with a certificate of recognition at the 2017 Green Bond Pioneer Awards to celebrate the achievement. The certificate was accepted on behalf of Monash by Dr Siobhan Martin, Chair of the Monash United  Kingdom Global  Leaders' Group.

Climate bonds let organisations and governments raise money to fund environmental projects. Monash raised A$218 million, all of which will go towards sustainable development projects that will help Monash reach its goal of net zero emissions.

Monash University President and Vice-Chancellor, Professor Margaret Gardner AO, said the success of the Climate Bond Initiative reflects Monash's position as a global university. 'As a truly international university, Monash has a responsibility to provide strong and visionary leadership on sustainable  development.  We want our campus network to be exemplars of environmental, social and economic best practice,' Professor Gardner said.

Over the next two years, Monash University will allocate capital raised through the Climate Bond to a portfolio of projects that achieve certification in accordance with the standards of the Global Climate Bond Initiative. 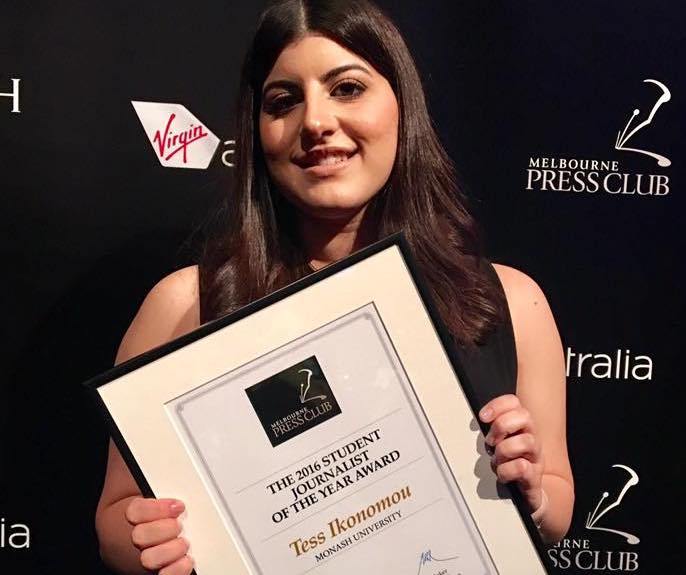 Monash had a strong showing at this year's Melbourne Press Club Quill awards.  Our journalism staff and graduates were recognised with three Quill awards and three high commendations at a ceremony on 17 March.

Journalism graduate and ABC journalist, Tess Ikonomou, won Student Journalist of the Year for her news story that highlighted the plight of Monash University academic, Dr Biswajit Banik, and his family who were denied  permanent residency in  Australia because of their son who lives with autism. Less than a month later, Dr Banik and his family were granted residency after the assistant minister for immigration intervened.

Alumnus and reporter for The Age, Beau Donelly, was shortlisted in two categories. He won the Victorian Government Quill for Reporting on Disability Issues for his piece Anthony's Decision to Die in The Sunday Age and was highly commended in the News Report and Writing category for his report on the failure of Victoria's child protection agency to safeguard  confidential information.

Arts Law alumna and 7.30 (ABC) reporter, Louise Milligan, won the Golden Quill along with colleague Andy Burns for their reporting on George Pell and sexual abuse in the Catholic Church.

Associate Professor Phil Chubb at the Monash School of Media, Film & Journalism said that every success inspired staff and students to achieve more. 'Quite apart from the Quills, our students have won a very large number of awards for work published in 2016. We scored six wins and highly commended  in the  Ossies, which are the awards handed out by the Journalism Education and Research Association,' Associate Professor Chubb said. 'These records are a great testimony to our staff, our resources and, of course, our students.'

Monash journalism has benefitted from the $3 million Monash Media Lab which allows students to produce journalism with a modern newsroom, TV and radio studios, editing suites, and other state of the art equipment and facilities. Monash Master of International Relations alumnus, Fahd Pahdepie, has won the 2017 Outstanding Young Alumni Award. Supported by the  Australian Embassy  in Jakarta, the award is part of the 2017 Alumni Awards which recognise and showcase the significant contribution made by alumni in their professional fields.

Fahd is the author and social entrepreneur who developed inspirasi.co, an online platform for aspiring writers, videographers, photographers and graphic designers to showcase their projects and build networks. Fahd explained that inspirasi.co is an open platform which invites creative people from multiple  disciplines to  spread the idea of diversity and tolerance. 'Imagine if they can create writing, designs, illustrations, videos, or music that campaign for diversity and create a counter-narrative to terrorism? That will be something!' said Fahd. Since its launch in January 2016, the site has  reached  more than 46,000 members and over 74,000 works have been uploaded.

Fahd completed his Master of International Relations in 2015 and he said it was the lessons he learned during his studies that inspired him to follow his career path. 'I remember a paper in Dr. Gu's class called Social media as the new battleground in Indonesian politics and that was the trigger for me to set up Digitroops Indonesia, an agency that provides strategic social media services for government institutions,  politicians, political  parties and companies.'

Next, Fahd plans to continue his creative work by moving into filmmaking. 'I want to make a movie. So far, I think the movie is the highest achievement in creative work. I believe that I can spread more messages and reach more audiences with movies. I want to inspire as many people as I can and that  is  what inspires and motivates me to do the best in my life,' said Fahd.