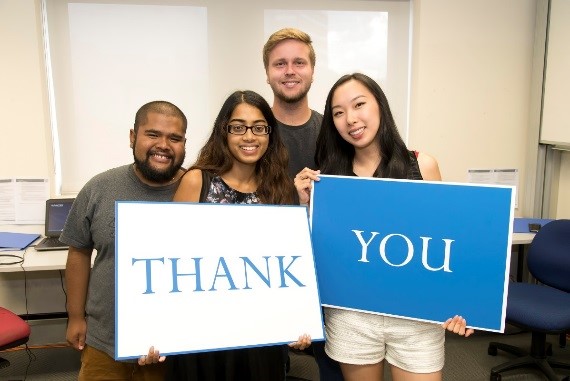 The Monash Student Outreach Campaign is beginning again in March following the University’s most successful year in 2016. Last year, the students spoke with 24,000 alumni who donated an unprecedented $390,000. These gifts have been used for a wide range of worthy  causes at the University.

A number of students from disadvantaged backgrounds were supported with the costs associated with their study. Without the generous support from alumni, many of these students would not be able to realise their potential at a tertiary level. Hear first hand about the impact these scholarships have made on the recipients.

Monash leads innovative research programs that deliver real world changes to people globally, such as the Inhaled Oxytocin project which is saving the lives of new mothers throughout the developing world. Projects like these are directly funded with donations given by Monash alumni.

Thank you to the 3,789 people who donated through the campaign. We’ve been able to achieve so much because so many people came together to give selflessly.

Our students want to speak to you again this year. They want to hear about what you’re doing now, get your feedback on what’s happening at Monash, and give you the opportunity to help some of the most deserving students study at Monash.

Your feedback on what the University is doing is important to us so even if you’re not able to donate this year, we still want to speak with you. We want to make sure that Monash remains as important to you now as it did when you were studying here.

We look forward to speaking with you and hearing more of the fantastic stories of your time at Monash.

If you'd like to contact our Outreach team with any questions or feedback on the call you received, please email outreachcentre@monash.edu.