Associate Professor Mark Wright completed his undergraduate B.Sc honours degree at the University of Melbourne in 1984. In 1987, he joined the Immunoparasitology unit at the Walter and Eliza Hall Institute to commence a PhD under the supervision of the eminent immunologist Prof. Graham Mitchell. Whilst completing his studies on characterizing the antigens of the human parasite Schistoma mansoni, he identified a parasite protein that was one of the first members of the tetraspanin superfamily. In 1991, armed with an NHMRC CJ Martin Fellowship, Wright joined the MRC Cellular Immunology Unit, at the Sir William Dunn School of Pathology, Oxford University, where he conducted post-doctoral studies under the guidance of Prof. Neil Barclay and the late Prof. Alan Williams. In Oxford, Wright consolidated his research on tetraspanin proteins, switching his attention to the function of tetraspanin proteins in immune cells. In 1994 Wright returned to Australia to the laboratory of Prof. Ken Shortman at the Walter and Eliza Hall Institute, where he continued his research on tetraspanin proteins and initiated a new program, molecularly characterizing the surface of dendritic cell populations. In 2000, Wright moved to the Austin Research Institute to form his own laboratory working on his twin interests of tetraspanins and dendritic cell surface proteins. After 7 happy years, he joined the Monash Department of Immunology . Together with his continuing research interests, Associate Professor Wright plays a major role in the Immunology teaching program. He currently co-ordinates the 3rd year immunology units IMM3031 and IMM3042, and supervises honours and PhD students. 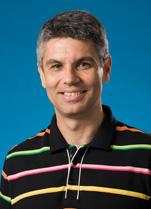 The Leucocyte Membrane Protein Laboratory studies molecules expressed at the surface of white blood cells. These receptors play a critical role in the biology of white blood cells as they serve as molecular antennae. Their role is to receive signals from outside the cell and allow the cell to respond to and interact with its environment. This laboratory focuses on two complementary, but distinct fields of interest. Firstly, we are fascinated by a particular type of cell surface protein known as the Tetraspanins, and we aim to determine the precise role that these molecules play in the immune system. Secondly, we are interested in the identification and characterisation of novel molecules expressed at the surface of a rare and important type of white blood cell – the dendritic cells (DC). DC expressed surface molecules may represent exciting new targets for manipulating the immune system. Understanding the molecules that control white blood cell function will ultimately lead to novel therapies for diseases controlled by the immune system, such as infections, autoimmune disease and cancer.

The Tetraspanins are a type of membrane protein characterised by four highly conserved membrane spanning domains (see facing figure). White blood cells are known to display up to 17 different tetraspanin molecules at their cell surface. Their major role is to organise the cell surface, by complexing with other membrane and signalling proteins. This allows the tetraspanins to influence a number of key cellular processes such as proliferation, adhesion and migration.
However, a number of key questions remain unanswered in tetraspanin research: What is their role in the immune system? Why are there so many different tetraspanin family members? To what extent do their functions distinct or overlapping? Our lab aims to answer these questions, using the power of gene targetting technology. Together with collaborators, we aim to produce mice that are genetically incapable of expressing specific tetraspanins at the cell surface and examine how the immune system functions in the absence of the tetraspanin in question. We have already produced and analysed knockouts for 3 tetraspanin genes: CD37, CD151 and TSSC6, and identified a number of phenotypes induced by tetraspanin deficiency. Our analyses suggest that tetraspanins play roles in all major leucocyte lineages including:

Current research in the lab, aims to understand the molecular mechanisms that underlie these functions. Further work in producing and characterising novel tetraspanin knockout strains is ongoing.

Dendritic cells (DC) are a rare type of white blood cell with a critical role in presenting foreign material to the immune system and thus inducing immunity. Therefore DC play a critical role in vaccination, and for a vaccine to be effective, antigen must be efficiently delivered to DC. Recent research has revealed that DC are heterogeneous, and that different sub-populations of DC vary in their function. For example, in the mouse spleen there are three distinct DC populations which can be distinguished by the expression of the surface molecules CD4 and CD8: CD4+DC, CD8+DC and CD4-CD8-DC. CD8+ DC are efficient cross-presenters of antigen, and secreters of the Th1-inducing cytokine IL-12, whereas CD8-DC promote Th2 immunity. We wish to understand the molecular differences that exist between the differing DC populations as these molecular differences may explain the functional differences that exist between the dendritic cells. Given the differing types of immunity induced by DC populations, molecules that are differentially expressed on the surface of DC are potential targets for developing new drugs to manipulate the immune system.

In a collaborative project between the Leucocyte Membrane Protein laboratory, and Mireille Lahoud and Ken Shortman (WEHI); we have initiated a program aimed at identifying additional DC molecules differentially expressed between populations. We have constructed our won micro arrays from normalised cDNA libraries generated from a pool of dendritic cell populations. These micro arrays have been interrogated cDNA generated from highly purified DC populations. We have identified and characterised several candidate genes that appear to be differentially expressed by other DC populations by the CD4+ or CD8+ DC and these are illustrated in the adjacent figure.

Molecules that are differentially expressed between the DC populations include Ig superfamily molecules, C-type lectins and 7-pass membrane proteins. A major focus of our future work will involve the molecular and immunological characterisation of these novel genes.

Honours and PhD projects are available on the twin interests of our laboratory - the structure and functions of either: 1) Tetraspanin proteins 2) Novel Dendritic cell surface molecules. Interested students should contact Associate Professor Mark Wright mark.wright@monash.edu for further discussion