The Melbourne Buchenwald Boys, like many other Holocaust survivors, arrived in new countries that were in stark contrast to the Eastern European countries of their childhoods. They brought nothing with them, save for their strength of spirit and determination to rebuild their lives.

However, the Melbourne Buchenwald Boys are a unique group in the Jewish community. Through happenstance, they were liberated together as youths. They shared the trauma of their pasts and the challenges of finding pathways into their future. As young men, they valued the mutual respect and support that were to be the basis of their lifelong friendships.

The historical event that brought them together was their liberation from Buchenwald concentration camp on 11 April 1945. A few of the Boys remember their friends from these early days, although most of them place the beginnings of their friendships in the orphanages in France and the sanitoria in Switzerland. Others met on the long boat journey to Australia. Jewish Care, or the Australian Jewish Welfare Society as it then was, brought more of them together by accommodating them at the hostel in Camberwell, Melbourne. Mina Fink’s special relationship with the Boys further consolidated their group identity as the Buchenwald Boys.

Celebrating at the 55th anniversary of liberation

Having arrived in Australia at similar ages during the important life stage of young adulthood, after having spent their adolescence in the turmoil of the Holocaust, further cemented the group’s bond. As they reclaimed some of their lost youth, and created and shared dreams and opportunities, their relationships strengthened. Feeling deeply the loss of the families of their childhoods, the Buchenwald Boys became family for one another. Like brothers, their deep-rooted relationships have endured.

Over the years, their sharing continued as they supported one another during times of need. The Boys told how they supplied food for the family of one of the Boys who had died suddenly – the first of their group to die, leaving behind his wife and their three young sons. They told how, on numerous occasions, they rallied together to collect money to help others among them. For example, they tried to hire a helicopter to look for the son of one of the Boys who had gone missing on the snowfields of Mt Buller, Victoria. 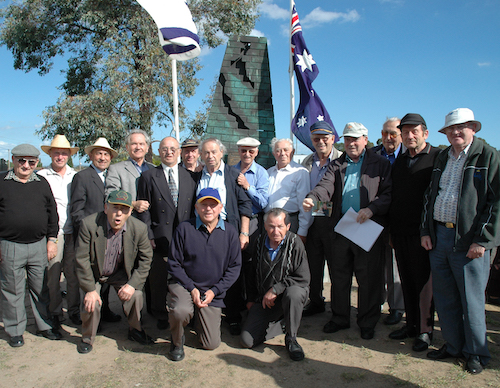 Buchenwald Boys Monument, built by Andrew Rogers, at Springvale Jewish Cemetery. Australian and Israeli flags are in the background.

As early as 1951, they formed a recognised fundraising group within the Melbourne Jewish community in order to reciprocate the generosity extended to them when they first arrived. Even in those early days, they donated part of their meagre incomes to the Australian Jewish Welfare Society. With time, they held drawing room meetings to fundraise. Every anniversary of their liberation, the tradition of Tzedakah, or charity, is continued when the Boys and their families donate to the Jewish community in the name of the Buchenwald Boys.

In 2000, the Boys consolidated their bond with the monument that they built at the Jewish Chevra Kadisha Cemetery in Springvale, Victoria. In the shape of the crematoria chimneys of the camps, the monument was built as a memorial to the Boys’ parents who had died during the Holocaust, without a burial place of their own. The names of the Buchenwald Boys who have since died have been added to the monument, uniting them in perpetuity.

This monument serves as a strong visual reminder of the collective spirit of the Buchenwald Boys, with its fractured, sloping chimney symbolising the trauma that the Boys overcame in creating new lives in Australia.