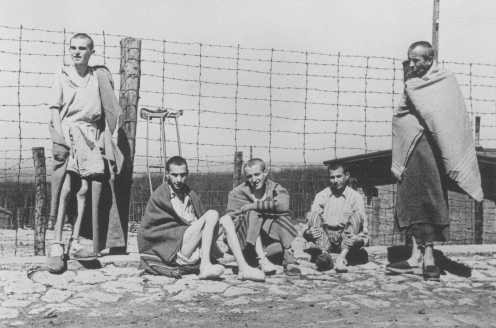 Buchenwald concentration camp was liberated on 11 April 1945 by the Sixth Armored Division of the United States Third Army. On the date of liberation, there were approximately 21,000 inmates, about 4,000 of whom were Jewish. Over 900 of the inmates were Jewish children under the age of 17.

During the weeks before liberation, many of the Boys knew that the Americans were close. They recalled hearing the shelling of the Allied Forces near Buchenwald. This created tension in the camp because people feared the Nazis would try to eradicate evidence of their brutalities, as many of the Boys remembered them doing when Auschwitz was evacuated at the end of January, only a few months earlier. By the end of the first week in April, the evacuation of Buchenwald had begun. The SS officers removed inmates and killed many in the nearby forest, while others were sent on “death marches” to other camps. On 9 April and 10 April 1945, 4,880 and 9,280 inmates, respectively, had been transported out of the camp. Tens of thousands perished. (Hackett, David (editor and translator) The Buchenwald Report, 1995)

From 10 April, the Boys waited in fear. Many searched for places to hide.

Melbourne Boy, Jack U, who was in Block 66, described the day before liberation. He said that on the night of 9 April he and a few of his friends, who slept on the top of the bunks, made a hole in the ceiling. They crawled between the ceiling and the roof intending to hide there until after liberation. However, the ceiling was not strong enough so, during the day of 10 April, the ceiling collapsed and the young inmates fell to the floor. As punishment, the Germans were to take them out of the camp to be shot in the forest. However, while they were being taken, the Germans heard the American planes flying overhead. It was the Boys’ good fortune that the Germans fled, leaving the Boys from Block 66 to find new hiding places, where they stayed until the following day when they were liberated by the Americans. 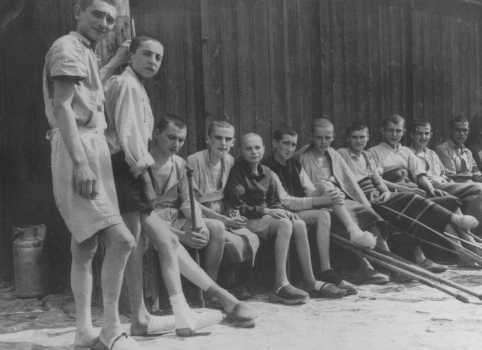 Many of the inmates who were not in Block 66 assembled on the Appelplatz, the main square, prior to being marched out of the camp. Some hid in latrines, or other places, fortunate to have survived until the camp was liberated.

Some of the Boys attribute their survival to chance events, such as those described above, or to the support that they received from others who were in camp with them. One of the Melbourne Boys, Joe K, recalled that a Czech guard pulled him and his brothers under a plank of wood, enabling them to hide and thereby survive the terrifying time just prior to liberation.

On the morning of 11 April 1945, political prisoners began the liberation of Buchenwald, seizing the German posts as officers fled. In the afternoon of 11 April 1945, the American Third Army arrived to officially liberate the camp.

However, one Melbourne Boy told how, for him and many others, the Holocaust did not end on 11 April when Buchenwald was liberated. For them, the horrors continued for another six weeks during which time they were sent on further death marches, struggling, close to death, until the War ended on 8 May.

Melbourne Boy, Emil K, told how he had been evacuated from Buchenwald at this time and liberated nearby, in Weimar. He had been badly injured and was extremely sick, so he was taken to a hospital not far from Weimar. Newsreel footage of Boys leaving Buchenwald after liberation, escorted by American Army personnel in order to relocate in SS accommodation

Buchenwald was among the first large concentration camps liberated by the Americans. The Western world was shocked by photographs and film footage of the camp: the piles of dead bodies and inmates, who were called “muselmann” because of their emaciated bodies, hardly more than skeletons, on the brink of death.

Although many of the Boys did not weigh more than 30 kilos and were extremely weak and sick, they were elated by the arrival of the Americans. Some left their sickbeds to see General Dwight Eisenhower when he visited the camp a few days after liberation. Eisenhower was so shocked by what he saw that he ordered that civilians from nearby townships be brought in to witness the horrors of Buchenwald.

However, for many of the Boys, liberation was a time of devastation. It was then that they had to face what they had lost. Their parents had been murdered and the life that they had known had been destroyed. Many of them were extremely ill and malnourished, and their most pressing need was critical medical attention.

Some of the Boys were in the infirmary at the time of liberation. Many more of them were hospitalised straight after liberation, some remaining in hospital for many weeks. Yossl B in Jewish religious service in Buchenwald – his brother Baruch is two to the right. Photo – United States Holocaust Memorial Museum.

What I remember from camp is that, when we were liberated, I happened to be busy cleaning myself from the lice that had infested us in the previous few weeks in Buchenwald. So, when a friend who happened to sit beside me told me, “Look, the American tanks are coming, we are liberated!” I couldn’t even be bothered, and continued killing the lice on my shirt. I couldn’t even muster a smile. One week later I was treated for typhoid fever by the Americans in the former SS barracks. (Hoffman, Oscar, 1999)

The photographs that the US Army took when they arrived in Buchenwald provided the world with evidence of the horrors of the Nazi regime. By the end of June 1945, many gut-wrenching photographs along with video footage had been shown.

In recent years, some of the early photographs that had been kept in private collections have been displayed on the internet. Others, which have been archived in museums, have had their authenticity verified by historians. Important photographs of the period immediately following liberation have thus become available. 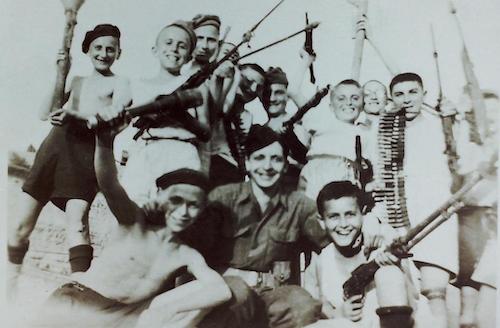 The son of Melbourne Boy, Yossl B, recognised his father and uncle in a photograph on exhibition at Yad Vashem in Jerusalem. This photograph, taken on 18 May 1945, showed American Chaplain Rabbi Herschel Schacter in a large room in Buchenwald concentration camp, leading a religious prayer service during the Jewish festival of Shavuot. Many of the Boys recalled religious services, such as this one, in the camp after liberation. They told of the first Sabbath service where the prayers that Rabbi Schacter sang, and the traditional Jewish food that he arranged for them, reminded them of home and the family that they had lost.

The Melbourne Buchenwald Boys credit Rabbi Schacter and another Jewish US Army Chaplain, Rabbi Robert Marcus, with enabling them to reclaim some of the adolescence that had been robbed from them during their years under Nazi incarceration. In interviews, some of the Boys told how Rabbi Schacter was concerned for their wellbeing and tried to reintroduce them to Yiddishkeit, the traditions and customs of the Jewish culture of their childhoods.