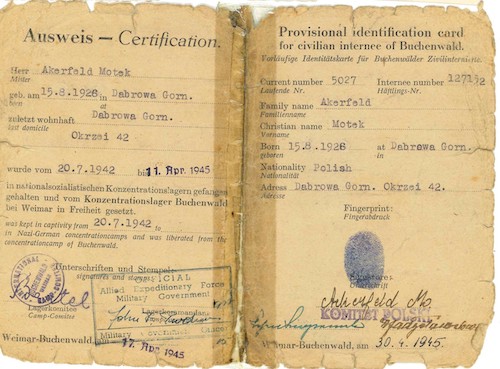 Some of the Boys were reallocated accommodation in the deserted SS barracks, just outside the main camp. Melbourne Boy Max Z remembered sharing one of these rooms with Szaja C, who remained Max’s lifelong friend until Max died some 70 years later in Melbourne, Australia in 2014.

Liberation and its aftermath brought great suffering to the Boys due to the enormity of their loss. Most of the Buchenwald Boys were orphaned during the Holocaust and many lost their entire families, including siblings, grandparents, aunts, uncles and cousins. One Boy described the personal impact of losing his father during the difficult and arduous death march from Auschwitz to Buchenwald, while another told of the devasting death of his father in Buchenwald concentration camp. Joe K suffered the tragic loss of his mother due to an infection contracted in Ravensbrüch concentration camp just before that camp was liberated. The Boys, who are now in their nineties, still carry the memories of their parents all the time.

After liberation, a small number of the Boys found family members who had survived. For example, Ari K was reunited with his mother, who survived the Second World War and was liberated from Bergen Belsen concentration camp. Others found siblings in the weeks and months after liberation. However, most of the Boys were completely alone.