By 1938, the worrying news of the rise of antisemitism in Nazi Germany had reached most of the Buchenwald Boys and their families. The Boys described the increased antisemitism and their fear of unavoidable attacks in the buildup to the German occupation of their hometowns. Some of the Boys told about threats of violence by local people that prevented them and their families from running or hiding from the invading Germans.

A priority for most Jewish families during those uncertain and terrifying times was to stay together. One of the Buchenwald Boys, Nathan W, who was born in a town close to the German border, described how in 1939, before the outbreak of the War, he and some of his siblings were visiting a town nearby when his parents heard that war was imminent and called the family members back home. Like many of the other Boys, he was not yet 13.

The occupation of Poland on 1 September heralded the dramatic destruction of the Jewish communities of Europe. The Boys remember the invasion by the Germans. Salek R, who was born in Czestochowa, Poland in 1928, described as an “indelible memory” the terrifying arrival of the Nazis as he watched the local synagogue burn. Szaja C, from Wielun, Poland, was 11 when the Gestapo came into his home and murdered his father. Szaja told how he, his mother and his younger sister had to dig a hole in which to bury him. His father had been shot because he refused to follow a German command to hang ten Jewish men from their town, including his uncle. Many of the Boys were in Auschwitz concentration camp before arriving in Buchenwald. This photo shows the arrival of Jews from the Carpathian region and the selection process that was undertaken on their arrival at Auschwitz Birkenau. The SS divided prisoners into two groups – men one side, women and children the other. 1944 Auschwitz Album. 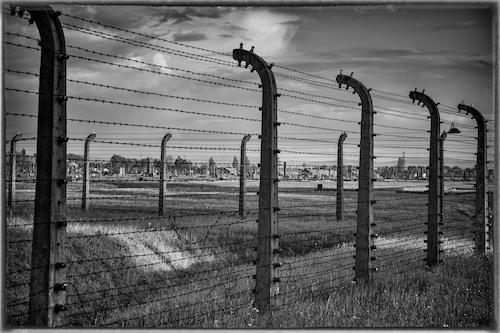