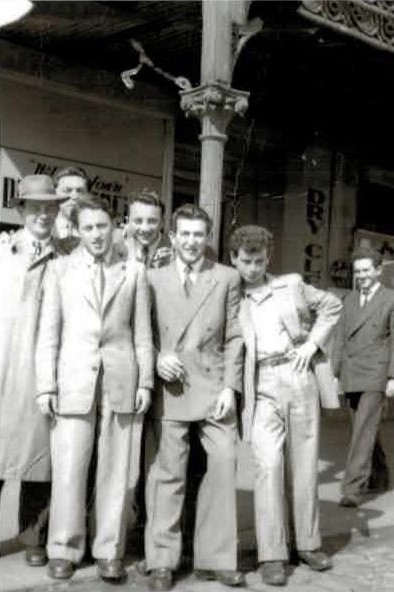 Boys outside Cafe Malinovic, Carlton, circa 1949

This house became a centre for the Buchenwald Boys in the months after their arrival in Melbourne. By the beginning of 1949, about 20 of the Boys were staying there. They shared two large rooms, further consolidating the strong bonds forming among members of the group.

Jack U, when he decided to leave Sydney to join the Boys in Melbourne, went straight to 818 Burke Road where his friends lived. He said that he knew everybody there. Although the hostel was full, he appealed to Leo Fink to allow him to move in. Many of the Boys who had known one another from the post-War orphanages and homes in France or Switzerland initially kept together with the Boys they already knew from those times. Jack had been in France after the War, but it did not take him long to get to know the “Swiss” Boys who were staying in the Burke Road hostel. Mr and Mrs Wexler, who ran the hostel at that time, tried to make it as welcoming as possible. When Mina Fink arrived with newcomers, the Wexlers had the table set ready to serve them all a meal. The Boys who lived there told of the good times they shared, playing pranks on one another, going out dancing and meeting girls. One Boy described the fun they had when they took turns doing household chores, like washing the dishes.

They supported one another in trying to overcome some of the difficulties they faced in adjusting to their new lives in Melbourne. One Boy described the quietness and isolation of Camberwell, and how it contrasted with the European places where they had lived straight after the War. Max Z said that some of them would have returned to Zurich, if they had been given the chance. However, Max, like the other Boys, appreciated the opportunities presented to them by the AJWS and people like Mina and Leo Fink. They were never short of food, they had job opportunities and, most importantly, they had friendship and support. They were young men, living their youth and looking for fun. They would go to restaurants, take public transport, or meet up with other young people, including the other Buchenwald Boys who were not accommodated in the Burke Road hostel.

Some of the Boys who did not stay in the hostel in Camberwell found their beginnings in Melbourne more difficult. Moniek R explained that it wasn’t easy starting their new lives. They worked hard and came home tired.

However, eventually, the Boys moved out of the hostel and they all had to find their own way. Whether they found lodgings together, or rented single rooms on their own, they all stayed connected with one another.

Many of the Boys rented in rooms in Carlton, or suburbs nearby, before moving south of the Yarra to St Kilda or Elwood. They lodged in rooms where full board was provided, or where they paid for bed and breakfast and ate their evening meals in restaurants, where they met up with friends and other Jewish post-War immigrants. The restaurants were often a dining room in a Jewish home, where the diners paid for Jewish-style homemade meals. Joe K, who rented a room with bed and breakfast, remembers eating his evening meals in such a restaurant in Elwood, run by Mrs Wachtel, where there was a regular set menu for each night of the week. Jack U found lodgings in Carlton, on top of a restaurant run by Mrs Malinovich. He recalled that he paid 4 pounds a week for full board. He told how he could go to the fridge and take out whatever he wanted.

The Boys told many stories about the food in Melbourne. As is the case with many people from culturally and linguistically diverse backgrounds, food is nutritionally, emotionally and culturally important. Some of the Boys recalled a bakers’ strike not long after they arrived in Melbourne. There was no bread, but to their surprise and delight they had to eat cake! Yossl B said that he wrote to his brother, who was still in Switzerland, telling him that he should come to Melbourne because “here you eat cake, or you starve!” Max Z, emphasising the abundance of food in Australia, noted that in Europe they ate a lot of potatoes with a bit of meat, whereas in Australia, they ate a lot of meat with a bit of potatoes.

Initially, although work was available, finding the right work was difficult and it took some time until the Boys established themselves. Some members of the local Jewish community wanted to help the Boys by offering them work. Some worked in Jack Lederman’s factory, others worked in the Fink family business, or in other businesses. Some of the Boys found jobs for their friends in the factories where they worked. The Boys were young, energetic, and eager to learn and try to get ahead. However, one Boy, S, told of his disappointment with his first job in a Melbourne factory. S was a skillful designer of fashion accessories and his boss promised him a good future at the factory if he stayed there. However, with time, S felt that his boss was taking advantage of him by paying him poorly and not honouring his promise. Max Z, in his autobiography, wrote of the difficulty he experienced in his first job as an electrician because he could not speak English well and because he wasn’t used to imperial measurements.

Yossl B remembered Leo Fink gathering all the Boys in the Burke Road hostel into one room and telling them that, if they wanted to be their own boss, they should buy themselves a sewing machine. Leo gave this advice because the Boys had a better chance of being able to afford to invest in a few sewing machines than in businesses that required capital-intensive machinery. Acting on Leo’s advice, some of the Boys taught themselves to be tailors or found someone to teach them tailoring. They then showed their friends how to sew.

Some of the Boys found jobs using the skills they had learnt in their hometowns, or in Europe after the War. After saving enough money, some set up their own businesses, alone or with business partners. They chose garment manufacturing, milk bars or other types of small businesses. Two of the Boys and their wives bought a milk bar together so that the wives could work in the shop during the day, while the Boys had other jobs. The two couples shared between them the long hours working in the milk bar. Some of the Boys were employed by those who had started their own businesses. Moniek R told how the Boys used to discuss business together, sharing experiences, referring one another to contacts they had made and supporting one another when needed. 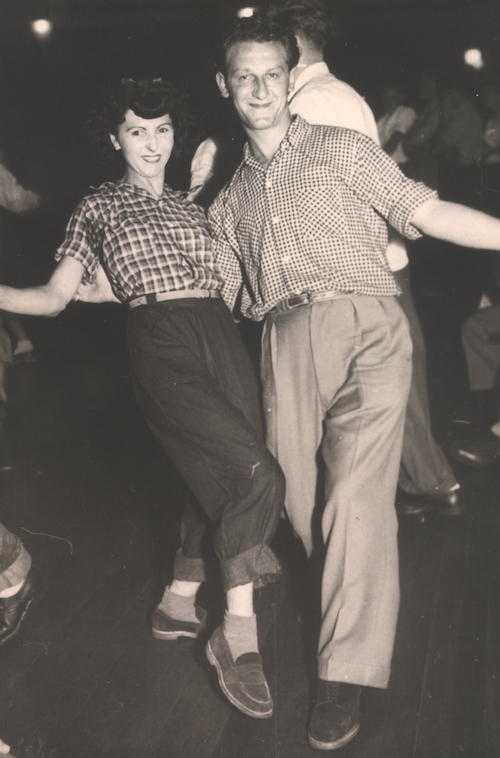 The Buchenwald Boys arrived in Australia at an age when they could try to make up for their lost adolescence. The Boys told stories of meeting girls. During the 1950s, dancing was an important social activity in Australia and, for most of the Boys, dances were the place to meet up with girls. They spoke of dancing at Palm Grove in St Kilda, or the Maison De Luxe in Elwood, where many of them met the young women who were to become their wives.

Dancing is a theme that runs through the story of the Buchenwald Boys in Melbourne. They danced in their youth and continued dancing into their old age. 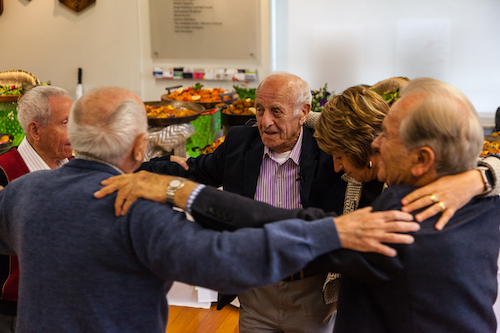 St Kilda Beach was another popular meeting place. Generations of immigrants have enjoyed St Kilda Beach, with its large expanse of sand, lawns and shady trees, with a pier and views of boats. It also offered cosmopolitan shops, continental-style cafes, public transport and proximity to the city. Many of the Buchenwald Boys found lodgings in nearby St Kilda and Elwood.

However, many of the Boys recalled that, in the post-War years, some Australians were intolerant of them because they couldn’t speak English very well. Furthermore, as Ben E explained, he and many of the concentration camp survivors experienced difficulty socialising. Ben said that the Australian Jews rejected them at that time because they were “foreigners”. He and some of the other Boys told how the Australian Jewish parents wanted their daughters to meet boys who had factories and cars. He explained that, in his opinion, the Australian Jews were “not nice” and he felt that caused the Boys keep to themselves. The Boys walking together at St Kilda Beach 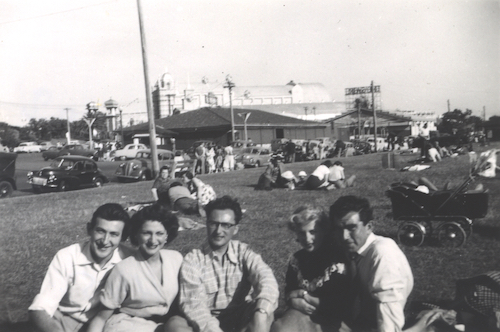 Two of the Buchenwald Boys, Henry S and Chaim J, married two sisters. This photo is of Henry and his bride, Freda. Chaim is pictured to the right of Freda, and her younger sister, Rachel, who was to become Chaim's wife, is standing next to him.

The Boys explained that there were always more Jewish boys than Jewish girls, and some of them went out with non-Jewish girls. However, during the interviews, many of the Boys said how important it was for them to marry a Jewish girl. Some of the Boys married women who had survived the Holocaust in Europe, but most married Jewish women who were not Holocaust survivors. Some of their wives were born in Australia to immigrant parents. Others were born in Europe – in countries such as Poland, Germany or Hungary – and came to Australia with their families before the War. A couple of the Boys married women who were born in England or New Zealand and immigrated to Melbourne after the War.

Several Boys told of the emotion and joy that they felt when they were invited to the family homes of the women who were to become their wives. One Boy explained that he knew that he wanted to marry his wife-to-be when she refused go out with him on a Friday evening, because it was Shabbos and she and her family observed the sanctity of the Sabbath. He said that he had been brought up in a very religious home, but that, after the Holocaust, he rejected the religious practices. However, his girlfriend’s response reminded him of his home and he knew he wanted to marry her and build a Jewish home with her.

Two of the Boys, Henry S and Chaim J, who had been in Switzerland together, married sisters, and remained good friends throughout their lives. 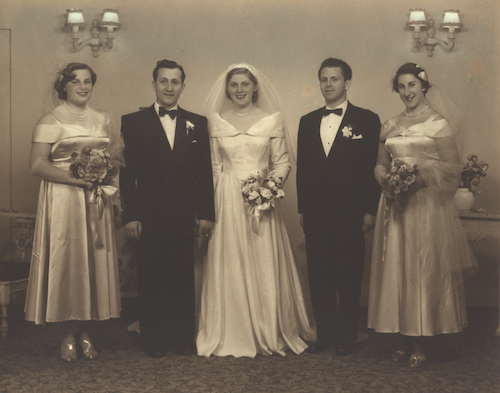 Many of the Boys were best men and groomsmen at one another’s weddings. The Boys described their relationships as being like brothers. Their wives became friends through the Boys. As they started young families, the Boys became the uncles and their wives the aunties for one another’s children. 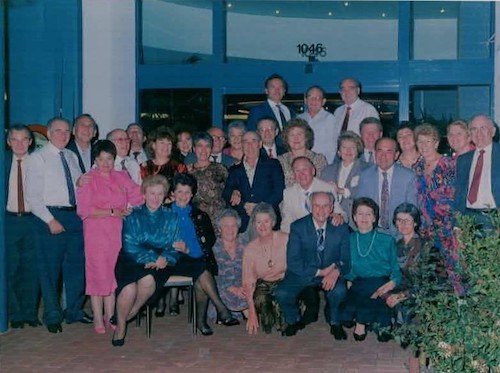 The wives of the Buchenwald Boys became friends.