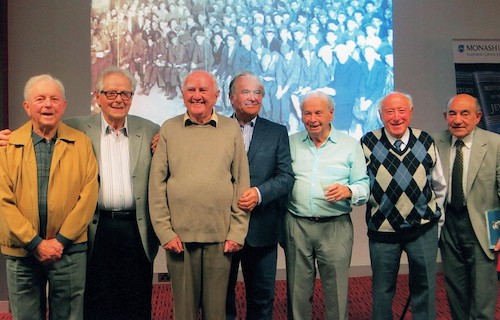 Boys at Australian Centre for Jewish Civilisation at Monash University. Photograph of Buchenwald Hall in background.

The life stories of Holocaust survivors have been told, documented and analysed in efforts to understand the events of the Holocaust, the resilience of individuals to survive the traumas of the Holocaust, and the capacity of survivors of those traumas to rebuild their lives afterwards. However, to many Holocaust survivors and their families, the foremost aspect of the telling and retelling of Holocaust stories is the importance of remembering. Remembering ensures the past is not forgotten; it shapes Jewish identity and contributes to Jewish continuity.

This importance of remembering the Holocaust is highlighted by one group of Holocaust survivors, the Melbourne Buchenwald Boys, who have established a tradition of remembrance through their annual “Buchenwald Ball”. Seventy-five years after the liberation of the Nazi concentration camps, the Ball, which has become a luncheon, is attended by the surviving Boys and their wives, and around 200 of their children, grandchildren, great grandchildren and friends. 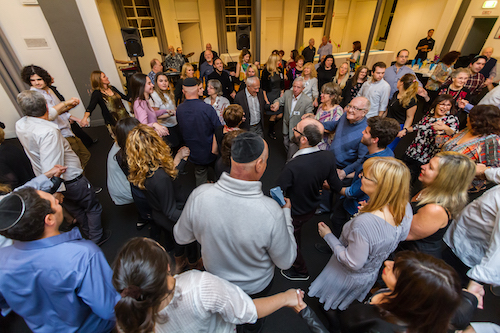 The Buchenwald Boys were among the 900 Jewish youths liberated from Buchenwald concentration camp by the US Army on 11 April 1945. While their places of birth and early childhood years varied, all the Boys experienced the evils of antisemitism, the trauma of separation from their families, the horrors of the death marches, and the suffering of incarceration in concentration camps. By the time Buchenwald was liberated, most of the surviving youth found themselves to be orphaned and destitute, with no means of support. After their initial refuge in orphanages in France and sanitaria in Switzerland, and participation in other Jewish rescue programs in England and Europe, about 65 of these young Buchenwald survivors found their various ways to Australia in the late 1940s. The Boys settled in Melbourne, where they were united in building new homes, raising families, engaging in successful lives, and maintaining their lifelong bonds of friendship.

Jewish Care, known at the time as the Australian Jewish Welfare Society, and members of the Australian Jewish community, especially Mina and Leo Fink, were instrumental in enabling the Buchenwald Boys to obtain passage to Australia and settle in Melbourne. Mina Fink, affectionately called “the Mother of the Buchenwalders”, guided and supported many of them in their early years in Melbourne.