Arriving in France and Switzerland The arrival of the Buchenwald children in France and Switzerland brought unexpected problems due to their age, traumatic Holocaust experiences, anxiety about missing family members, and grief for family members known to have died. The French and Swiss carers did not know how to respond.

Organisers in both the French and Swiss homes expected young children under 15. Jack U told how the French carers had prepared children’s toys for them. Melbourne Boy, Yossl B, recalled that the Swiss Red Cross had organised children’s clothes. Neither the French nor the Swiss organisers had understood that it was very rare for young Jewish children to survive in a concentration camp. Nearly all of them, upon arrival in a camp, were selected for death. The young boys tried to make themselves look older and stronger so that they would be selected to work, and to live. Judith Hemmendinger, who was head of an Oeuvre de Secours aux Enfants (OSE) home in France, wrote that the boys often hoarded food in their rooms. Other care givers explained that the staff usually served the boys their portions of bread and that this distressed some of the boys, as it reminded them of food rationing in the labour and concentration camps. Therefore, Hemmendinger and her assistants decided that the bread should be placed on the table so that the boys could help themselves, and that the kitchen should be left open so that the boys could take food whenever they wanted. These small, but important, changes supported the boys in adjusting to life after the camps. Hemmendinger explained that this had the additional benefit of helping to create a family atmosphere in the home. (Hemmendinger, Judith and Krell, Robert, The Children of Buchenwald, Jerusalem 2000) Hemmendinger wrote that, initially, the primary focus was to nourish the boys, without regard for the boys who wanted to eat kosher food. This added to the distress that some of the boys experienced. Therefore, they arranged for kosher food to be bought, and for some of the more religious boys to be sent to another home, where they could keep kosher and observe the religious traditions.

Swiss researcher Madeleine Lerf explained that, because the staff who cared for the youth in Switzerland were inexperienced and unprepared, they found it very difficult to look after those who had arrived. They had been surprised to receive so many young men between 16 and 22, often very traumatised after all that they had been through. Many of the boys required medical attention, as well as counselling. (Lerf, Madeleine Buchenwaldkinder: eine Schweizer Hilfsaktion, Zurich 2010) 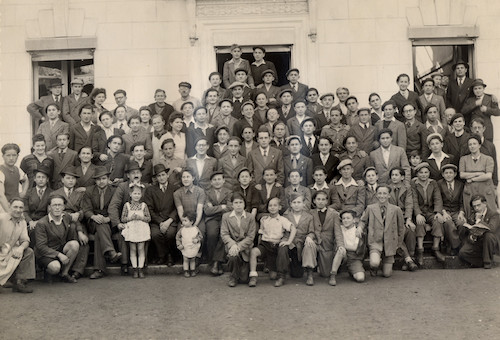 The young Buchenwald survivors, understandably, had great anxiety about their families. Hemmendinger described how they were constantly checking survivor lists trying to find family members. It was during this time that many discovered that none had survived. She explained that the grief and tension caused fighting among the boys. She also recognised that some of the fighting was due to the rift between the Polish boys and the Hungarian boys, a problem which had carried over from Buchenwald. Therefore, the French carers decided that rather than allocate the boys to dormitories according to age, they allowed the boys to choose their own roommates. This arrangement was more successful, as the boys chose to share rooms with others from their own towns, irrespective of age. This gave the boys a degree of familiarity and comfort with those around them. 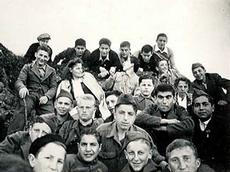 In Switzerland, initially, the Boys were in a large home that accommodated a few hundred people. The Jewish Welfare subsidised their clothing and other living expenses. The Boys tried to make the most of their circumstances, even though some of them still experienced difficulties. Yossl B, expressing the attitude of many of the Boys who eventually settled in Melbourne, said, “(W)e were very happy after we were liberated. Everywhere we went was happy.”

Yossl B remembered going to the Jewish organisation in Switzerland who helped them find accommodation, and who gave them a weekly “pocket money” allowance so that they could go to restaurants. When it was discovered that some of the Boys in Switzerland had tuberculosis, they were sent to sanitoria in Davos to convalesce. Max Z described the luxury of the accommodation and many spoke of the beauty of the surroundings. 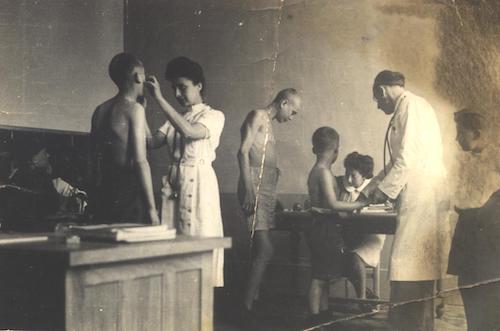 Andre Z in medical unit after liberation. Courtesy A Zelig.

The Boys who had been in Switzerland described their new-found adolescence, playing sport, meeting girls and having fun. They became healthier and stronger. Some of the younger Boys, especially those in France, received schooling. During this time of refuge, efforts were made to make up for some of the time they had lost while they were in Buchenwald concentration camp.

With time, the Boys in both France and Switzerland learned skills and trades that helped them to find work and to start businesses when they eventually settled in Australia. Max Z recalled being given an aptitude test that showed that he could go on to higher education. However, he decided against it because he wanted to get on with working. He had started repairing electrical things in the ghetto, and therefore chose to attend an ORT school in Geneva to train as an electrician.

The Boys remembered being invited into the homes of some of the local Jewish families. They missed their own families, and their need for family was great. Max spoke of the emotion he felt when a Swiss Jewish family invited him to his first shabbat meal since losing his family.

Melbourne Boy, Gert S told how they arrived in Switzerland about one month after the end of the War, and how members of the Swiss Jewish community, who had heard rumours about the camps, were very interested to hear the experiences of the young survivors. (Lerf, Buchenwaldkinder, p168)

Where family was found, the French and Swiss organisations arranged for the Boys to meet up with them. Benny G found an uncle in France. He lived with this uncle for a while, but he was very unhappy as he felt more comfortable and had more in common with his friends in the orphanage. Some (Swiss) Jewish families invited us out from the children’s home and asked us for a Friday night or a “Yontov” (Jewish festival). It’s amazing how it took us years really to be able to sit through a proper Friday night with the family, a normal family, because it came back and it was tremendously hurtful. … (F)rom nine or ten boys who were invited to different families – eight came back – walked out. We apologised the next day but we just couldn’t sit through – impossible. And they were understanding. You went back and apologised…

Salek R was invited to go to the French Alps with a Jewish family from Marseilles. They liked him so much that they invited him to live with them. He went to trade school while he was with them. However, Salek declined their invitation because he missed his friends who were still in the orphanage.

The French and Swiss organisations had agreed to accommodate the Buchenwald children for a limited time only. Jack U recalled being abruptly evicted from the orphanage in France. They all had to move on and face the difficult task of embarking on new beginnings. Yossl B learning a trade in Switzerland