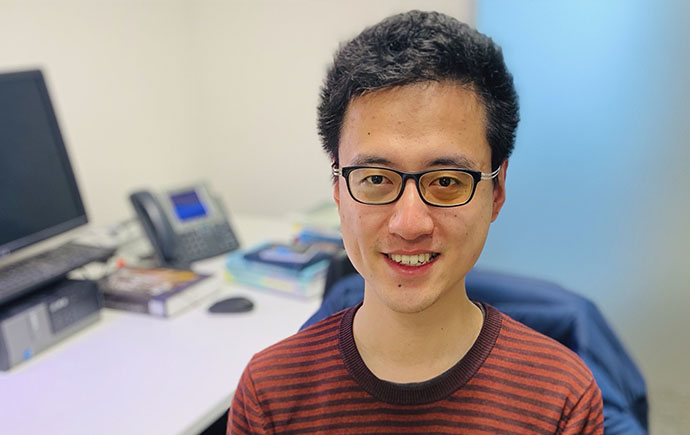 Weijia Li loves Economics for the combination of feeling useful to society in general and using very formal and rigorous tools.

“When I first started to study Economics I found everything so clean and clearly defined. All the policy recommendations are very clear and it gives you precise conditions when you should and should not do something. I love that.”

Initially Weijia planned to do his PhD in Public Finance, a field that helps you design social insurance, unemployment insurance and optimal taxation but when he actually began his research, he discovered new questions that intrigued him more.

The million-dollar question of why this was happening is what set him on his research path in Political Economy, mostly in developing countries.

“The question that interests me most is how do we find a good government to implement optimal social policy and to be accountable to its’ citizens.”

Now he’s working on several topics, one of which is a project focusing on the political cost of corruption and another on collective actions and revolutionary entrepreneurs. A third project, with Nathan Lane, is on information technology, business concentration and the influence on consumers.

Weijia is originally from a province outside of Shanghai. He did his undergraduate studies at Tsinghua University in Beijing and his PhD at UC Berkeley outside San Francisco. He is the only person in his entire family to live outside of China.

“My parents miss me of course but they believe working in an English-speaking country is very good for career reasons and that Australia is such a happy country.”

Once Weijia was on the job market he applied to a few universities in the US but one of the advantages to him of Monash is that it’s located in a big city and that it’s relatively close to China. He frequently returns to attend conferences.

“It’s also clear that the department is on an upward trend. There are many great people, like Nathan Lane and Paul Raschky for me to work with here. The Economic History group here is doing extremely vibrant, new, and cutting-edge research. That’s exciting for me as it’s quite hard for me as a Political Economist to find a good fit.”

And contrary to the opinion of many others, he finds housing in Melbourne very affordable.

“When you’ve lived in the San Francisco area everywhere else is so cheap. And Melbourne is just awesome, doesn’t everyone say that?”

He also doesn’t understand why people complain about the Melbourne winter.

“What, they think this is cold? Beijing is as cold as Moscow in the winter, so this is nothing,” he says.

When he’s not at work Weijia likes swimming and enjoys listening to live classical music, something he thinks Melbourne is great at providing too. His dream is to one day soon listen to a concert in the Sydney Opera house.

He is also an avid reader of philosophy and literature. Immanuel Kant is his favourite philosopher.

“Kant’s idea that you need both concept and intuition to perceive anything is so powerful. He says ‘thoughts without content are empty, intuitions without concepts are blind’ and that is very meaningful to my research.”

Among his favourite literary authors are Russian and German classics such as Leo Tolstoy and Thomas Mann. A Chinese classic he recommends which has not lost its true character in the English translation is “Dream of Red Chamber” which is the most important book in the Chinese literature tradition.

“The translation is fantastic but the problem is it still sounds like Jane Austen which is totally not the case in the original. You have to suffer for the first five chapters but then it turns into pure magic.”