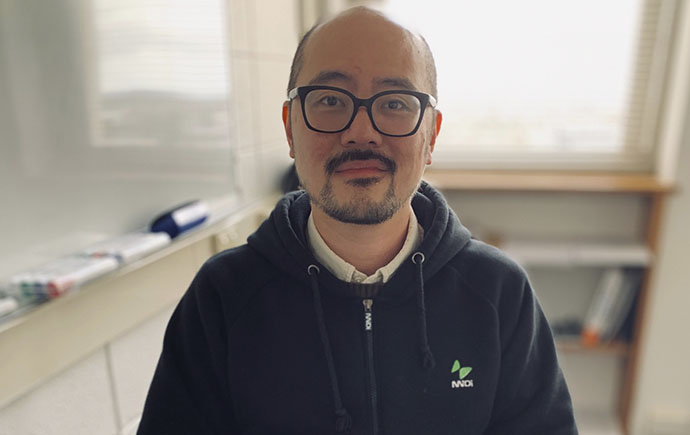 Xiaojian Zhao has not been long in Australia when we meet. His wife and son have since also followed him from Hong Kong. He has just bought a house from a colleague and is looking forward to the excellent research environment at Monash and the relaxing life of Melbourne.

“My son is 5 years old this year so it is the right moment to decide a place for him to grow up. For the family it is better to stay in one place and this is the most liveable city in the world, right?" He laughs.

“My wife likes it very much here too. She has supported our move to Australia and now we are looking for a school for our son.”

Xiaojian is originally from Tianjin in China. He completed his undergraduate degree in information management and information system in Jinan University at Guangzhou and went on to work in the Tencent company as a software programmer. However, he soon became bored and thought it would be a good idea to study abroad.

“At school I was intrigued by maths and physics and I never really planned to do Economics. But at the same time I was driven by my interests in rock n roll music; there are many complex social problems and interesting aspects of human nature I wanted to understand.”

So he set off on his path by doing a Masters in Politics and Economics at Freiburg University and his PhD in Economics at the University of Mannheim, in Germany. During this period, he became obsessed with Microeconomic theory, as it looked like a natural mix of his seemingly unrelated two parts of interests, maths and society.

“It explains complicated human behaviour by explicitly modelling preference and choice behaviour and linking it to utility representation. It uses game theory to model complex social interaction to capture not only economic problems but also problems in law, politics, finance, biology, psychology, sociology and even linguistics. It’s an amazing tool, very exciting!"

Following his years in Germany, he was assistant professor, first at the Hong Kong University of Science and Technology and for the last two years at the Chinese University of Hong Kong (Shenzhen).

Why did you choose to come to Monash?

“The research environment in my field is excellent at Monash. I do both theory and experiment, including contract theory with application to IO and finance and here the department is very strong. I am also interested in behavioural and experimental economics and more than ten people here are doing experiments. In my field of study, it’s definitely one of the best places in the world for me.”

Xiaojian’s research focuses on the border between psychology and economics. At the moment he’s particularly working on economics of motivated cognition/beliefs, which is part of but beyond behavioural economics.

“Often behavioural economists assume certain behavioural biases but I am more interested in the underlying rationale of the behavioural biases – why people are biased. In what I do, I don’t take them as given but I try to explain them. We use standard methodology such as game theory and economic experiments but analyse problems in cognitive psychology. For example, I build games in which an individual plays with himself, and tries to understand why and how the current self manipulates the memory, or gives some commitment power to the future self. So I split the individual in to several selves and let them play games. Motivated cognition is a quite interdisciplinary field!”

While he studied in Germany languages fascinated him. He experienced the cultural difference between German and Chinese so it became natural to ask why.

“For example in English when we speak about marriage for instance, there is only one verb and the object of marriage changes. In Chinese there are different verbs for marriage depending on who you marry, if a male marries a female it’s one word “Qu”, if a female marries a male it’s one word “Jia”, if the lady is dominant in the relation it’s another word “Dao Cha Men” and so on.”

His enthusiasm for languages shows in the other main topic of his research. He uses artificial code in a lab setting and people communicate only by using symbols that he has set up and then the participants try to communicate.

“In the lab we can do a clean design and manipulate certain factors and change one factor of the treatment keeping all the others the same to see if one factor is a driving force to the emergence of a certain language property or not. There is a huge controversial topic in linguistics where people think if you are Chinese maybe your way of looking at the world is different from an English speaker. We don’t know if they have a causality or not. This is very tricky to test in the real world but in a lab you can control certain environments and we can see how this affects thinking.”

When he’s not working Xiaojian enjoys martial arts, especially boxing. Recently he has also tried grappling techniques such as No-Gi BJJ which he wants to keep doing. Busy days ahead for this new colleague as his wife and son arrive from Hong Kong. He has just bought a house from a colleague who is moving to something bigger down the road.

“I was really lucky, the house is wonderful and also I will still have a really nice neighbour.”