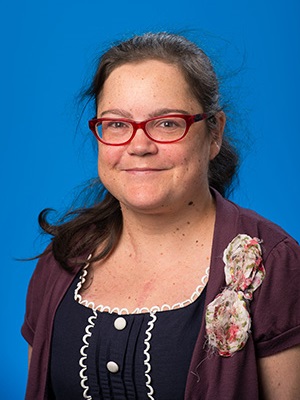 Dr Claire Stubber has died at the age of 42. She was a remarkable woman and scholar.

Claire was aged 17 when she came to the Alfred Hospital from Perth to prepare for receiving a donated heart and lungs, after a lifetime of increasing debilitation resulting from a rare pattern of congenital cardiac defects. Claire has said that she felt death approaching; her doctors in Perth had told her parents to take her home and love her. Claire remained grateful that her parents in addition sought organ transplantation on her behalf.

Claire's transplant surgery was in October 1996; it gave her 24 years of extra life. Although she continued to have problems with her health that saw her in and out of hospital, Claire made the most of her life and loved what these extra years allowed her to do, such as read, think, and write; become an aunt; enjoy a happy marriage; and contribute as a valued member of an academic group.

Despite her disrupted schooling, Claire completed a PhD at the University of Western Australia. In her PhD thesis she analysed Mary Shelley's novel Frankenstein and compared it with her own life story as a person constructed from body parts. Claire then came to Melbourne to live, to be near The Alfred.

It was a great day for Global and Women's Health when, in 2014, Claire sent her CV to us. We met her and thought that she could bring an original perspective to our work in public health. Indeed she did. Her literary skills contributed to qualitative analysis, to clarity in many papers produced by the team, and to our weekly work-in-progress seminars. Recently, she co-authored a systematic review of qualitative research on recipients of donated hearts and/or lungs. It included a summary of the adverse effects of receiving organ donation, such as cancer, rare infections, diabetes, and elevated cholesterol; Claire commented to her co-author, Maggie Kirkman, that she had experienced them all.

Claire's most recent work, and that to which she was most committed, was to ensure that people confronting the prospect of receiving a donated heart or lungs could watch videos on the internet of recipients prepared to describe their experiences in detail. She (with Maggie Kirkman) completed six lengthy interviews and uploaded them in a format that made them searchable. Claire contributed her own story to the collection. This initial work was funded by the Grenet Foundation through Ann Hyams. Claire's colleagues are determined to seek further funding to extend and refine this project.

Claire met the man who was to become her husband, Ian, while they both prepared for transplantation. Ian received lungs to ameliorate the effects of cystic fibrosis. Theirs was a close partnership in which their different interests were shared. Ian is a photographer who specialises in cosplay (in which people wear costumes associated with a character from a game or film); Claire acted as his assistant. In turn, Ian set up recording equipment before each interview with a transplant recipient.

Claire was admitted to hospital in September 2020 and suffered diverse and increasing setbacks until her death two days before Christmas. Her family was with her. She is survived by her husband Ian Stubber, parents Barbara and Leo, sisters Anne, Eve, and Zoë, and her sisters’ families. Her friends and colleagues, while mourning her loss, are grateful to have worked with Claire and to have benefited from her generous warmth, her insight, her sense of humour, and her scholarship.

Dr Maggie Kirkman and Prof Jane Fisher also had a long-form obituary published in The Age on 10 March 2021 which you can read here.