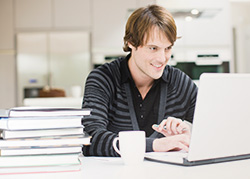 The course aims to help high-achieving students acquire the knowledge, skills and attitudes to achieve excellence in research scholarship.

In addition to working as ambulance paramedics, Honours students can specialise in the intensive care field and expand into clinical education, research and management positions.

Students must have completed a Bachelor of Emergency Health (Paramedics) degree at any University with an average of at least 70% in at least 24 credit points at third year level.

Applicants can apply directly to Monash via http://www.monash.edu/admissions/apply/online

David’s ambulance and paramedic career spanned four decades beginning with the Victorian Civil Ambulance Service in 1966 where he was accepted into the newly established Cadet Ambulance Officer program. His early career was interrupted when he was conscripted into the army as a National Serviceman with the Royal Australian Army Medical Corp.

He returned to the Civil Ambulance Service when the role of the ambulance attendant/officer was rapidly evolving. David developed an interest in training and quickly became an on-road Training Officer. Ambulance pre-hospital care was advancing and he was accepted into the first cohort of officers to be trained in Coronary Care and Mobile Intensive Care for Ambulance Officers (MICA). He went on to become a MICA Training Officer and Station Officer.  He later was promoted to the Principal Training Officer for the Metropolitan Ambulance Service and during this term, he oversaw the introduction of the Rapid Response Defibrillation Program and a Continuing Education Program for all ambulance officers. He also stewarded into the service the Critical Incident Stress Debriefing and the Peer Support program.

David was accepted as a member of the Institute of Ambulance Officers and served as Chair of the Victorian Branch and was a National Executive Councillor for five years. He was also an active member of the Australian Institute of Management and was elevated to Associate Fellow. For three terms he was the Ambulance representative on the Australian Resuscitation Council. During his Ambulance career, he undertook formal tertiary undergraduate and postgraduate management, education and student support qualifications. As a consequence of his interest in training and education, he was seconded to the Ambulance Officers Training Centre as a teacher. Later, he was appointed to the newly formed Monash University Centre for Ambulance and Paramedics (MUCAPS) to head the Professional Development Unit. This unit successfully attained a number of education and training contracts including the Australian Army and the Metropolitan Fire Brigade. He also led MUCAPS’ international recruitment program for the undergraduate paramedic degree in the Middle East.

David presented the case to the Victorian Parliament Public Bodies Review Committee for Fire Fighters to be trained in early defibrillation and become part of the Emergency Medical Response in Melbourne. He consulted several bodies including the Parliament of Tasmania to review the operations of the Ambulance Service.

David was elevated to Life Fellow of the Australian College of Ambulance Paramedicine (ACAP). He was also a Founding Member of the Journal of Emergency Primary Health Care, Founding Director of the Victorian Centre for Early Defibrillation, Founding Convenor, Australian Prehospital & Emergency Health Research Forum, Founder ACAP Foundation. Throughout David’s career, he advanced and embedded professionalism in paramedic training and education in the setting of emergency primary health care.  For services to the community through the ambulance service and paramedic education, David was awarded an Australia Day Award, the Public Service Medal.

Malcolm was one of the first critical care and consultant paramedics in England and was a Past-Chair of the College of Paramedics and one of its founding members. He held many senior positions including: senior manager and leader in the Welsh ambulance service, Director of the Faculty of Pre-hospital Care Research Unit at the James Cook University Hospital’s Department of Academic Emergency Medicine and a Visiting Professor in Pre-hospital Emergency Care at the University of Teeside, and Professor in the Faculty of Health and Life Sciences Coventry University.  He also held a role as a Lecturer-Practitioner at the University of Swansea where he had managed the Pre-hospital Emergency Research Unit in the College of Medicine.  Globally, Malcolm was internationally regarded as one of the top paramedic researchers and methodologists.  He was very well published in some of the top medical and healthcare journals.  He also served on numerous editorial boards for high-quality journals including Emergency Medicine Journal.  In addition to his many individual professional achievements, Malcolm was a ground-breaking and tireless advocate for the paramedic profession through his efforts to improve education and encourage paramedic-led research. He was an outstanding mentor for paramedics at various stages of their career development, whether they were clinicians, managers, or academics.

Malcolm was very well known and highly regarded in Australia.  He was a Visiting Professor at Charles Sturt University and an Adjunct Senior Research Fellow at Monash University.  He was a regular speaker at the Australasian College of Paramedicine conferences for many years and very significantly a great supporter at Student Paramedicine conferences in Australia.  These addresses and workshops reflected his professional activities in the U.K., where Malcolm was one of the driving forces and professional voice of the paramedic profession.

Without the leadership, vision, and commitment of individuals like Malcolm, paramedic education and scholarship would not be at the standard that it is today in the U.K., or indeed around the world.  This scholarship provides an opportunity to continue Malcolm’s Australian-U.K., legacy and build strong foundations for the future direction of research in paramedicine.

Ric was an icon in the evolution of ambulance services and the paramedic as a professional in Australia. He has previously been honoured by the Australian Medical Association (AMA) and the Royal Australian College of General Practitioners (RACGP) for his leadership in this area.  Apart from his engagement and support of his community in the Latrobe Valley where he lived and practised most of his professional life, he was the co-initiator of the Latrobe Valley Ambulance Service, member of its committee for over 25 years and was President of Victorian Ambulance Services Association (VASA) for 25 years.  In addition, Ric helped establish the Ambulance Officer School at Geelong in 1961.

Without the leadership of people like Ric, paramedic education and scholarship would not be possible to the standard that it is today in Victoria, Australia.  Given the recent passing of Ric in 2107 and because of his leadership it is now appropriate to name an Honours Scholarship after him. Through the generous support of Ric’s family, the next era of paramedics will be given a great opportunity to continue Ric’s legacy and build strong foundations for the future direction of research in paramedicine.