This project investigates how Holocaust survivors in different cities tried to make sense of their traumatic pasts and fashioned distinctive identities as Holocaust survivors. Although they found themselves resettled in cities with very different urban and political environments, a global sense of survivor identity emerged in the post-war decades.

This project explores how such different environments produced such similar notions of what it meant to be a survivor, and how a common language emerged among many survivors. In many of the places in which survivors resettled, the Holocaust came to carry a similar kind of religious significance, one that often displaced their religious identities. These survivors established memorial cultures with their own distinctive calendars, rituals, and languages.

And yet, just as these common identities emerged across borders, these identities were multilayered, fractured, and often deeply contested. By examining what stories of the Holocaust the survivor world privileged and what experiences came to be lauded, this project asks: which stories were marginalized? How was the emergence of a particular kind of survivor identity built on the exclusion of other experiences? How did these debates among survivors shape what we understand the Holocaust to be?

‘“One of the Greatest Martyrologies of Modern Times”: Recording, Remembering and the Black Book of Polish Jewry’, in Reconstructing the Old Country: American Jewry in the Post-Holocaust Decades, edited by Sheila Jelen and Eliyana Adler, Detroit: Wayne State University Press, 2017, 44-67. 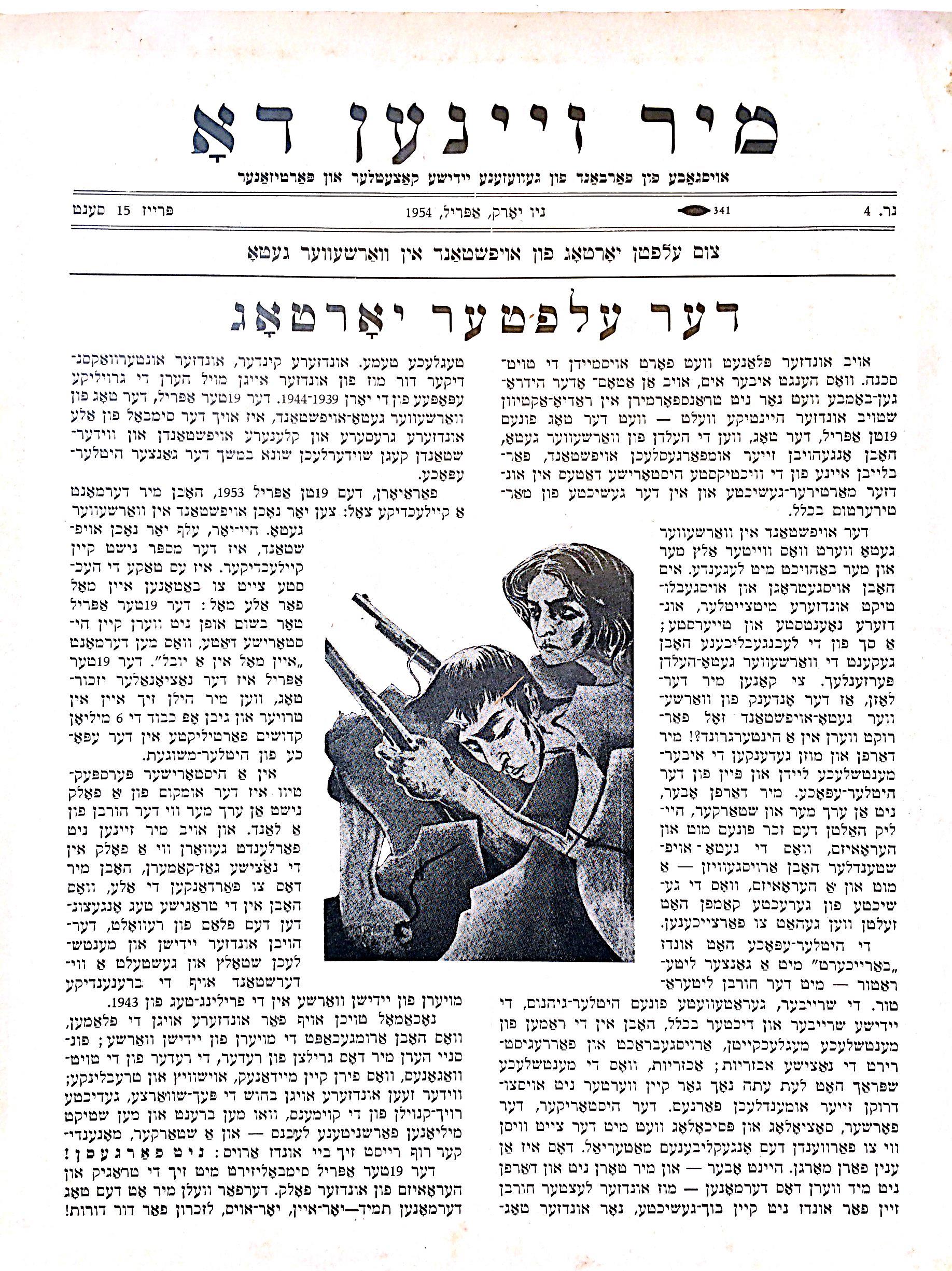 Page  from the journal Mir Zaynen Do [We Are Here], April 1954, publication of the United Jewish Survivors of Nazi Persecution (Katsetler Farband), New York.

‘In Heroic Struggle: Yiddish and English Survivor Publications in the Postwar Decades', Early Holocaust Remembrance In The Jewish Press, From The Second World War To The 1960s, American University of Paris, 25 November 2019.

"‘Veterans of our Destruction': Survivors and the Immortalization of the Warsaw Ghetto Uprising", Lessons and Legacies Conference, St. Louis, 1-4 November 2018.

"Communities of Memory: Survivors and the Holocaust in the United States", Southeast German Studies Consortium Workshop, College of Charleston, 9-10 March 2017.

“'Veterans of our Destruction': Survivors and the Immortalization of the Warsaw Ghetto Uprising", Association for Jewish Studies annual conference, San Diego, 18-20 December, 2016.

Public Lecture: “Yiddish is our language, concentration camp is our passport: Survivors and Holocaust memory in the United States", YIVO Institute for Jewish Research, New York City, 12 May 2016.

Emanuella Grinberg, How the Definition of Holocaust Survivor Has Changed Since the End of World War II, Smithsonian Magazine, 1 May 2019.