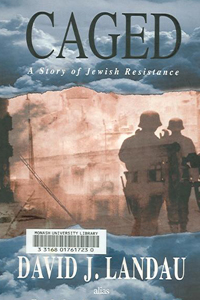 David Landau, a Polish Jew, spent the duration of the war in Warsaw. His memoirs provide a uniquely courageous illustration of Holocaust survival. Landau was one of those who actively and violently resisted Nazi occupation and the destruction of Polish Jewry. The first three pages of the book deal with Landau’s early life in Warsaw; 67 pages describe life under German occupation between 1939 and October 1940; 136 pages are devoted to life in the Warsaw Ghetto before the uprising; a powerful 37 pages cover the Warsaw Ghetto Uprising; the final 87 pages describe Landau’s experiences in hiding after the destruction of the Ghetto, his participation in the Polish Warsaw Uprising, and finally, the liberation of Warsaw by Russian and Polish forces in 1945. Landau died in 1996, only days after completing the manuscript. Originally published by the Landau family in 1999 for David’s grandson and the extended family, the book was re-issued on a wider scale by Pan McMillan in 2000.

Landau was born in Warsaw in 1920 to a prominent Polish-Jewish family with a strong Jewish identity, though no one in his family was religiously observant. Having no interest in school, he left at 15 to work in his father’s tannery. He tells of his mothers’ socialist influence and his early political affiliations with Pajorg (‘The House of the Worker’). With the occupation of Poland came the construction of the Warsaw Ghetto in October 1940. Once the ghetto was sealed off, Landau joined the Jewish Military Union (ZZW), a Jewish resistance organisation that was affiliated to the revisionist-Zionist Betar movement, and that had connections within the Polish underground. Involvement in the ZZW became one of Landau’s only two sources of inspiration during the difficult years of the war; the other was his wife, Luba, whom he married in October 1941.

Protected by forged papers and his ‘good face’ with Aryan-like features, Landau began smuggling in weapons from the Kiercelak market, in preparation for the day when the Jews of Warsaw would stand up against the Nazis. In August 1942, the deportations from the Warsaw Ghetto began, and these continued until the population of the ghetto was but a fraction of what it had once been. In early 1943, Landau continued to participate in preparations for armed resistance, and in April of that year, the uprising began. Two organisations participated in the uprising. The Jewish Fighting Organisation (ZOB) was a coalition of various organisations – Bundists, Zionists and others - that had come together to fight the Germans. The Jewish Military Union (ZZW), of which Landau was a member, coordinated with the ZOB but remained a distinct entity for political and practical reasons. Many historical accounts have focussed solely on the role of the ZOB in the uprising; Landau hoped his book would help to correct “…the inaccuracies appearing in the written records about the Warsaw ghetto, particularly with reference to the role in the Uprising of the ZZW…”

When the uprising began, the Germans were overwhelmed and surprised that Jews would have the audacity to take up arms against their persecutors. The army that had lain much of Europe to waste was forced to run twice from the Jews of Warsaw in the first three days of fighting. Landau, disguised in a fake SS uniform, ambushed a number of German soldiers in the streets during the fighting and inflicted heavy losses. Landau also took it upon himself to organise the hoisting of a Jewish and a Polish flag from a prominent building in the ghetto, an important symbolic gesture that is recorded in various accounts of the uprising. With daring courage and incredible good fortune, Landau managed to escape from the burning ruins of the ghetto. He again took up arms against the Nazis in 1944, fighting as a soldier in the Polish Underground Army. As the Russians moved closer to Warsaw, Landau and his wife were again forced into hiding and survived for three months in underground bunkers until the arrival of the Red Army in January 1945. Two years later, the Landaus came to Australia as refugees.

Landau pays meticulous attention to detail in his memoir. Although the book was written many years later, considerable effort has gone into recalling the details of the events that took place. Landau also devotes much of his work to reflections on the people he knew, events he took part in, and places he found himself. He writes with humility, despite his remarkable heroism during the war. The events he recalls are a tremendous testament to Landau’s bravery amidst the slaughter and tragedy that were the products of the Nazi regime.