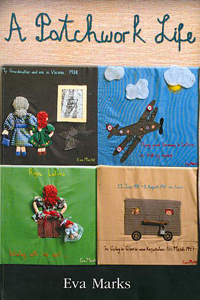 A Patchwork Life is the life story of Eva Marks, a child survivor of the gulag in World War II. Pages 1-31 outline Eva’s family background in Vienna and her exodus to Riga. Pages 32-73 depict her nightmarish experiences in Soviet prisoner camps in Siberia and Kazakhstan. Pages 74-102 portray Eva’s liberation and adjustment to normal life in Vienna. The remainder of the book, pages 103-228, describe Eva’s new life and family in Australia. Eva wrote her autobiography late in life, encouraged by her husband Stan. It was published by Makor Library in 2002.

Eva Marks was born into an assimilated middle-class family in Vienna in 1932. Following the traumatic events of the German annexation of Austria and Kristallnacht, Eva was flown to Riga, Latvia, to join her mother there while they awaited a visa to America. After the Russians occupied the town in June 1940, escape became impossible. When the Germans invaded in June 1942, Eva’s family was declared enemy aliens by the Russians and sent on a 6 week cattle train journey to Siberia.

In the work camp where they were stationed, conditions were freezing, lice rampant, and food scarce. As a ten year old, already sick with scabies, Eva deliberately infected herself with scarlet fever in order to gain access to the extra food and better conditions offered at the hospital.

In March 1943 Eva and the other prisoners were transferred to Kazakhstan, where they built for themselves a new prison camp, Kok Usek. Eva describes in great detail the horrors of both camps: the hunger, the crowding, the degradation and the violence. Temperatures were 40C in summer and 40C below zero in winter. She compares her conditions with those depicted in the works of Alexander Solzhenitsyn, claiming that Solzhenitsyn’s camps were favourable by comparison. Prisoners in Eva’s gulag had no contact with the outside world, and were imprisoned indefinitely without a set period of sentence. These factors were extremely demoralising for the inmates. Illness and death were constant companions in the camp. Eva survived a bout of malaria as well as a appendix operation performed without anaesthetic. On another occasion she almost drowned in a pool of excrement.

Having had no knowledge of the outcome of the war, the prisoners rejoiced when told in May 1945 that Germany had been defeated. Their hopes of being released, however, were soon dashed. Finally, in February 1947, the message arrived that Austrian prisoners could return home. After a six week journey by cattle car, Eva, her mother and her grandmother, who had both survived the gulag with Eva, arrived back in Vienna. Eva had spent 2099 days in the gulag.

After recuperating in a clinic, Eva, her mother and grandmother were allocated an apartment. This new residence, however, had to be shared with the parents of a high ranking Nazi. It took some time for Eva to adjust to her new life of freedom. Eventually she was able to immigrate to Australia where she met her husband Stan.

A Patchwork Life is a humbling depiction of life in the gulag. In horrifying detail Marks recalls the trials of survival in a place characterised by its cruel climate, and even crueller rulers.