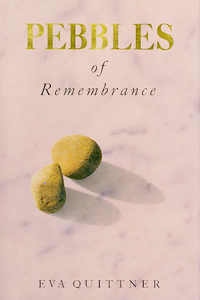 Pebbles of Remembrance came about as the result of conversations between Eva Quittner and her friend Eva Hulley. Agreeing at first to write about her childhood in pre-war Hungary for the benefit of her family, Quittner’s recollections soon pulled her into the darkest period of her life. 282 pages in length, the book is divided into two parts. Part I, on pages 1-110, describes life before the war in Gyor, Hungary. Part II, on pages 111-285, describe Eva’s experiences during the war, at first in Gyor, then in concentration camps until liberation in 1945 and her subsequent return to Hungary. Written and edited with the help and encouragement of family and friends, Pebbles of Remembrance was published late in Eva’s life, in 1993.

Eva was born in 1931 in the small town of Gyor, Hungary. She vividly describes her life as a young girl in Gyor; attention is given to describing her extended family, friends, neighbours and school. Her family were wealthy, assimilated Jews. Eva describes eating ‘Easter ham’ on her matzot on Passover. She describes her father as embracing of people of all creeds and sees her own liberal views as being rooted in his.

Eva’s first encounter with anti-Semitism occurred when she was in primary school. She attended a Jewish school, and older kids from the neighbouring public school would taunt Jewish students as they left for their homes. Eva’s father would come to school to pick up his children in order to protect them from their taunters. Eva attended a convent secondary school, where she was one of three Jewish girls in her class. She describes the nuns at her school in the fondest terms, reflecting on the fact that they never treated the Jewish girls differently from anyone else, though the Jewish students were permitted to stand silently during prayers and to miss religious instruction classes.

In the summer of 1942, Eva’s father is called up to the Hungarian army to join a battalion leaving for the Russian front. His regular post cards come to a sudden stop, and the family fears the worst. Eva’s grandmother, in her extreme despair, commits suicide. Several months later her father does, in fact, return home. Eva describes the day of his return as the happiest of her life, though her happiness would be short-lived.

In 1943, restrictions on Jews increase, but life for the 12 year old Eva remains relatively carefree. It is in March 1944, when the Germans march into Hungary, that things change dramatically for Eva. She and her brother, Joska, are expelled from their schools, along with the other Jewish students. Jews are forced to wear yellow stars, and are soon moved into a ghetto. On June 6, Eva and her family are rounded up and taken to Auschwitz. Before departing they witness brutal violence as Jews are physically abused by Nazi soldiers. Upon arrival at Auschwitz, Eva and her mother are separated from her brother and father, never to see them again. Though they had heard that Polish Jews had been deported, they did not know, until reaching Auschwitz, what awaited them there.

Eva and her mother, selected for labour, manage to remain alive at Auschwitz. She describes the back-breaking labour and the horrific conditions in the camp. One day, Eva and her mother are once again ‘selected’, this time for transfer to another camp, Reichenbach. There, conditions are better; they still work very hard, but are slightly fed more than at Auschwitz. During her time at Reichenbach, Eva’s mother is taken away in a ‘selection’. By that time, Eva knew what separation meant.

As the Russians approach Reichenbach, it is evacuated. Eva is taken on a ‘death march’ to Parschnitz. There, she was liberated by the Russians on May 8, 1945. She subsequently returned to Hungary, where she spent the following years and attempted to rebuild a life. She does not discuss her decision to move to Australia, but does mention the family that she has built up there.

Eva Quittner’s style is descriptive, reflective and, at times, creative. She does not simply recount events or even reflect upon them; she grapples with her experiences and struggles to come to terms with them. She movingly portrays the inner tension she felt when moving from writing about her carefree childhood to writing about the most traumatic experiences of her life, by describing a conversation between her sixty-year-old ‘self’ and the innocent young Eva she had been writing about. Her descriptive style makes her memories, happy and horrific alike, come alive.