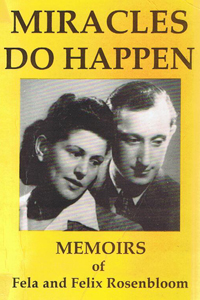 Miracles Do Happen is divided into two distinct sections. The first is the memoir
of Fela Rosenbloom, the longer, second section the memoir of Felix. It was published
privately in Melbourne in 1994 and then again by Scribe Publishing in the same
year.

Fela Rosenbloom (nee Perelman) provides a brief account (35 pages) of her experiences
prior to, and during, the war years. Fela grew up in Poland, in the Jewish quarter
of Lodz, in a strictly orthodox family. She describes her childhood as, ‘a
long unpleasant journey,’ and is very open in her dislike of her home
town. When the war broke out, Fela “could not comprehend what had happened,
could not make any sense out of it.” After leaving the Lodz ghetto in
April 1941 as part of a labour crew, Fela moved between various labour camps
and factories in Underdiessen, Buchl, Lohof and Augsburg. In the spring of 1943
Fela was taken to Auschwitz and subsequently lost her will to live. She was
plagued by illness and it was only due to a friend, her ‘guardian angel,’
that she was able to survive. After being transported to Ravensbruck, Fela escaped
from a Death March and managed to survive in a Polish farmhouse. After the war’s
end, Fela returned to Lodz in search of loved ones. On April 19th 1946 she was
miraculously reunited with her pre-war sweetheart and began a new existence
with him, first in Paris, then in Melbourne, Australia.

Felix provides a far more detailed account of his experiences, from his childhood
in Lodz to his new life in Australia. Felix was born was born into traditional
Jewish household in 1922. He was educated in a Bundist school, and both he,
and eventually his father, abandoned Jewish practice. Pages 35-59 portray his
family life, his education, and their struggles with antisemitism before he
war. After the outbreak of war, Felix escaped to Soviet-controlled territory
and worked in a coal mine in Kizel (p60-80). He was then captured and held prisoner
as an illegal immigrant for 15 months. Felix describes the bitter cold and meagre
rations in the gulag. (p81-93). Following his release in a prisoner amnesty,
he eventually found work in a sugar mill in Bijsk. In 1944 Felix was conscripted
into a Red Army labour battalion, but managed to escape in Stalinsk (p94-114).
After the German surrender, Felix was able to return to Poland where he was
reunited with Fela, as well as his colleagues from the Bund organisation. They
soon realised that there was no future for Jews in Poland. Felix and Fela moved
to Paris where Felix found work in a number of printing houses. In 1948 they
boarded a ship bound for Melbourne. Felix greatly appreciated the freedom and
opportunities that Australia provided, and was able to raise a family and start
his own printing company.

Both Felix and Fela composed their memoirs later in life, encouraged to do
so by their sons. Fela felt it important to tell her story, given that she was
the sole survivor in her family. Gripping and tragic, the Memoirs of Fela and
Felix Rosenbloom provide a window into humanity’s darkest period. Despite
the horror, they are grateful for the ‘miracles’ that kept them
alive and brought them together again.