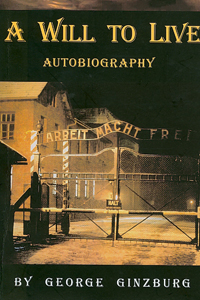 A Will To Live is the fascinating story of survival of George Ginzburg. The initial 34 pages describe George’s family life prior to, and during, Nazi rule, while pages 35-60 tell of his life on the run in Belgium and France. Pages 61-100 depict George’s detention and torture in Gestapo prisons, while pages 101-184 detail the horror of life and death in Auschwitz. Pages 185-208 describe the ‘death march’ from Auschwitz and George’s subsequent escape, while pages 209-240 portray his time in the US army. Pages 241-256 tell of his new life in Australia, while the remainder of the book contains appendices documenting historical information. As a volunteer at the Holocaust Museum, George was often asked by visitors if there was any way to get a written copy of the amazing stories he told. In response to this demand, and in order leave a testimony of the atrocities he witnessed, George finally wrote his autobiography in his late 70’s. It was subsequently published by Makor Library in 2003.

Georg Ewsey Ginzburg was born in Danzig-langfuhr in 1923. Middle-class Ukrainian Jews, George’s parents had fled the Russian revolution before relocating the family a second time in 1925, to Berlin. George’s father worked as a real estate agent and the family was able to enjoy a very comfortable lifestyle. George remembers Nazi parades through the streets following their electoral success. As a 13 year old he witnessed Jesse Owens’s famous victories at the Berlin Olympics. A member of the Betar youth movement, George helped rescue religious items from a burning synagogue on Kristallnacht. Fearing the worst, George’s parents sent him to Brussels on a Red Cross kindertransport. Following the German invasion of Belgium, George fled to France thinking that the French army could hold back the German front. After failing to cross into Spain, George headed back to Brussels where he posed as a German and found work with the NSKK (German Army Transport Supply Unit). After obtaining false papers and dying his hair blonde, George attempted to enter Switzerland. He was betrayed, however, by Swiss guards who turned him over to the Germans. Suspected of being a spy, he was relocated to Gestapo headquarters in Brussels. George was placed in painfully cramped solitary confinement, where he read prisoners’ final messages written on the walls in blood. After enduring interrogation and torture, George confessed his Jewish identity and was sent to join other prisoners in St Gilles state prison. He stayed in prison until September 1942 when he was relocated to the Maline transit camp, before being put on cattle train heading east.

Claiming that he was a mechanic with BMW, George survived selection upon arrival at Auschwitz. He worked in the water supply detachment, as well as volunteering for other duties in order to gain extra rations. George describes in great detail the sheer insanity of life in the camp: the cruelty of the guards and the Kapos, the hunger, the illness, smell of burning flesh and of course the ever-present shadow of imminent death. George managed to get himself transferred to ‘Canada,’ the section of the camp which dealt with all the confiscated belongings of the inmates and those who had been gassed. George worked delousing garments using poisonous gas. Despite the strict supervision and harsh punishments, George was able to obtain food and cigarettes from the women who sorted the belongings. He developed a relationship with one of these women, and with the aid of numerous bribes, was even able to arrange a short-lived moment of intimacy.

George’s intelligence and quick thinking kept him alive in the camp. On one occasion he narrowly escaped having to donate a testicle to a German soldier. He taught English and smuggled food for a fireman in order to get extra provisions. Surrounded by death in this hellhole, George was troubled by questions as to his relationship to God.

In January 1945, as the Russian front crept nearer, George and other inmates began a ‘death march.’ Anyone who could not keep up was shot by an execution squad at the rear of the column. The survivors reached the Gross-Rosen concentration camp before being placed onto cattle trains to Flossenburg and the march onwards. George managed to befriend a Hungarian SS sergeant who wanted to learn German and English. Knowing that he had to escape if he wanted to live to bear witness to what had happened, George traded gold fillings (that his girlfriend had given him in ‘Canada’) for warm clothes and food from his SS friend. Later, as the ‘death march’ continued in snow filled darkness, George rolled down a hillside without being seen. He was eventually liberated by the American army, which he soon joined as a soldier. Miraculously, he was reunited with his mother and together they emigrated to Australia to begin new life.

Rich in its eye-witness detail of the horrors of the camps, the narrative is also laden with historical background information, which George discovered after the war, on the politics, identities, and companies involved in the Holocaust. Fit for a movie screenplay, Ginzburg’s fascinating story is a fitting testament to his will to live.