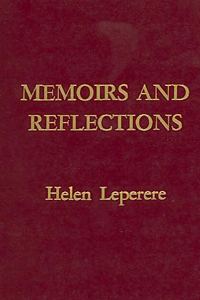 Helen Leperere’s autobiographical narrative covers her entire life, with accounts of pre-war life in her hometown, the war years, her subsequent experiences in a labour/concentration camp and her post war life and resettlement. Her story takes us on a reflective and personal journey that focuses predominately on the ramifications of the Holocaust on her immediate family. The first 12 pages deal directly with her place of birth, the Polish town of Sosnowiec. 30 pages focus on life under German occupation in Sosnowiec and in the ‘Gabersdorf’ camp in the Sudetenland. 25 pages detail her time in Paris after the liberation and there are five pages about her life in Australia. The last chapter, ‘On Reflections’ is a contemplative discourse on the psychological impact that the Holocaust has had on her family in Australia.

In January 1941, when Leperere was 14 years old, she was forcibly removed from her family and transported to the women’s labour camp. Prior to this event, Leperere, together with her father (an avid Zionist), mother, elder sister, younger brother and sister, lived in a top floor apartment in Sosnowiec, a town with 120,000 inhabitants, 30,000 of whom were Jewish. Following the liberation of her concentration camp, Leperere travelled to Paris with fellow prisoners where they struggled to restart their lives without family, homes or possessions. Leperere met her husband, Lon, in the Jewish Centre where they resided and had their first child there before immigrating to Australia in 1951.

With the onset of the war in 1939, Leperere and her family witnessed the persecution of the Jews unfold as they helplessly watched the main street in their town become the venue for numerous anti-Jewish demonstrations. Jewish businesses(including their own) were destroyed, windows smashed and shops looted. With her town soon under German occupation, Leperere was forcibly taken by SS soldiers and sent to ‘Gabersdorf’, a forced labour camp in the Sudetenland, which was annexed by Germany. That was the last time Leperere was to see her family. In the following years her parents were sent to their death in Auschwitz and her sisters died of disease in the ghetto. Whilst Leperere also learnt of her brother’s death, the manner of his demise remains unknown to this day. Leperere was a prisoner for four years and endured the horrors of camp life including hunger, illness, exposure to freezing temperatures and vicious, sadistic female guards. The work undertaken by the prisoners was in a spinning factory for 12 hours a day. Later, the factory was shut down and the women were forced to dig anti-aircraft ditches. In 1943 the camp was transformed into a concentration camp and regular selections occurred, including numerous visits from the infamous Dr Mengele, known for his sadistic ‘medical’ experiments in Auschwitz. On the 7th May 1945, the camp was liberated by the Russians.

Whenever Leperere writes of her family, her prose is filled with warmth and love and the pain she still feels over their loss. The emotive and poignant account of her last encounter with her family highlights the guilt she feels over her own survival. She candidly discusses the emotional burden this has placed on her own relationship with her daughter and how she has struggled to reconcile the long- term psychological consequences of the Holocaust.