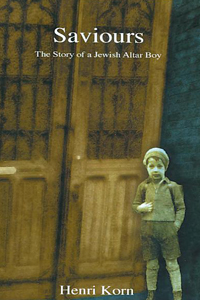 Henri Korn presents a fascinating portrayal of a childhood marked by anti-Semitism and war. Pages 10-40 describe Henri’s experiences visiting his grandparents in Pabjanice and Lodz in Poland. Pages 41-74 depict life in Wuppertal-Elberfeld and the impact of German occupation. Pages 75-119 record Henri’s escape to Belgium and his family’s survival in Brussels. Pages 120-178 describe Henri’s experiences hiding out in a convent in Ottignies. The final twenty pages tell of Henri’s family’s return home and subsequent emigration to Australia. Written for the benefit of his children, Henri’s book was published by the Makor Library in 2004.

Henri Korn was born in 1929 in Wuppertal-Elberfeld, Germany, the son of Jewish-Polish immigrants who had fallen in love with German culture. Henri’s family was completely assimilated and as a young child he did not even know that he was Jewish. He unwittingly participated in anti-Semitic activities and could not wait to grow up and join the Hitler Youth. Even after visiting his grandparents in Poland, where he was introduced Jewish practices and traditions, Henri still did not connect in any way to his Jewish identity.

In 1938 Jews were banned from attending Aryan schools. Henri could not understand why he was excluded. Henri witnessed the carnage of Kristallnacht, yet adored the military parades of the German soldiers. As a nine year old, he had no comprehension of what was happening around him. In mid 1939 Henri’s mother was taken away by the SA. When she returned days later she had arranged for Henri and his sister to be smuggled into Belgium. Eventually, Henri’s mother joined the rest of the family in Brussels. Henri was quite unsettled by his new environs, especially since he could not speak the local language. He wasn’t allowed to speak German in public as the Belgians hated Germany. In September, after changing his name from Heine to Henri, Korn began attending a Flemish School. After Germany’s westward invasion, the Korns sought refuge in France. Upon reaching France, however, they encountered a German soldier, an ideological opponent of the Nazis, who helped them find safety back in Belgium. Henri returned to school where there were sometimes fights between the Jewish and non-Jewish children. Ignorant of his own identity, Henri once fought against the Jews.

In 1942 Belgian Jews were forced to wear the yellow star. Gradually the Jewish population diminished as they were deported to the east. Henri and his sister were placed in the care of a Catholic convent, Le Joli Coin, near Ottignies. The woman in charge of the convent was an old-school anti-Semite and it puzzled Henri why she hid Jews. She would make the most vicious claims about Jews killing Jesus and ruining the world. Henri found her arguments irrational. Nonetheless, seduced by the opportunity for redemption, Henri converted to Catholicism. He became an altar boy and performed services in the church. He remained, however, uncomfortable with many of the church’s doctrines, particularly the rabid anti-Semitism espoused by the children’s church godmother.

In 1943 teenagers from the resistance arrived at the convent. With great excitement Henri helped with their reconnaissance. Finally, in 1944, liberation came with the arrival of American troops to the region. After being reunited, the Korn family discovered they could not communicate. Each member was reluctant to talk about their experiences. Henri had an identity crisis – realising that he had been brainwashed yet not really feeling Jewish either. In 1950 Henri emigrated to Australia.

Parts of the book contain brief vignettes of childhood memories, each adding to the rich narrative of a child growing up in challenging, and sometimes absurd, society. Korn’s style brilliantly transports the reader into the mind of a child, innocent and unknowing of his complex surrounds. As nations struggled on the battlefield, Korn endures a personal struggle to define his identity.