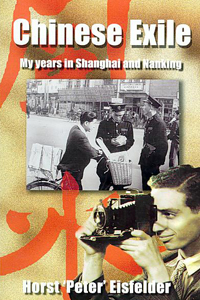 In his fascinating memoir, Eisfelder tells of his experiences during the war and its immediate aftermath, in Shanghai, China. 234 pages in length, Eisfelder published his memoir in 2003. He began writing, however, some 31 years earlier, at the request of Prof. Irene Eber, a lecturer in Chinese History at the Hebrew University in Jerusalem and the University of Michigan. His initial writings were for a small audience, and were based on notes that he had written during the war years. Before his book was published in 2003, he revised his work and had it professionally edited. The first 35 pages of the book relate the Eisfelders’ narrow escape from Germany and their experiences settling into their new life in China. Pages 36-81 describe life in the Jewish community of Shanghai in the early years of the war. Pages 82-195 tell of the war-affected years in Shanghai, and life under the Japanese until their surrender in August 1945 (pages 92-151 are devoted to photos, many of which were taken by Eisfelder himself). Finally, pages 196-234 are devoted to the few years that Eisfelder spent in China after the war, and his subsequent emigration to Australia.

Eisfelder was born in Berlin in 1925, into a family that had been in Germany for seven generations. Once Hitler came to power in 1933, Eisfelder’s parents saw the writing on the wall for German Jewry and began looking for ways to flee. Failed attempts to gain entry to Argentina and Australia left them in a situation where their passports would expire if they did not leave soon – the only place left to go was Shanghai. The Eisfelders departed Berlin on 26 October, 1938, just days after Horst’s bar-mitzvah.

Upon the Eisfelders’ arrival in Shanghai, they were met by members of the International Committee, an aid organisation for Jewish refugees that helped them organise housing. Horst vividly describes his new and unfamiliar surroundings: the magnificent ‘Bund’ river embankment, the busy streets, and the skyscrapers that dwarfed anything he had seen in Europe. The family moved into the ‘International Settlement’, an area of Shanghai in which foreign nationals could live under the legal jurisdiction of their own country. Jewish refugees from Germany, however, were subject to Chinese law, as Germany had lost its extraterritorial rights in the wake of World War I. The mixture of legal systems and confusion of jurisdictions created a kind of chaotic reality in Shanghai in which any fugitive could make a home there, and indeed, there were immigrants living in Shanghai from all over the world.

Horst’s parents, aunt and uncle soon set up a business, a small café. The café became quite successful, and their customers were many and varied. The influx of Jewish refugees in mid-1939 saw the community grow, but it also strained communal resources. Life was difficult for the newcomers, who had to live in cramped, impoverished conditions, and struggled to find employment. Once the war broke out in Europe and the number of Jews arriving in Shanghai increased, the Chinese authorities declared that a Landing Permit would be required for all new arrivals. Acquisition of such a permit would require employment to be secured in advance, amongst other conditions. Many were dissuaded from attempting to migrate to China. Ironically, however, due to Shanghai’s peculiar legal status, no one was ever actually asked to show a permit upon arrival.

In December 1941, the Japanese occupied the parts of Shanghai that were not already under their control. Life changed considerably for the residents of the city; the economic situation worsened drastically, and this was compounded for the mostly-poor Jewish community by their aid being cut off, since the money was more desperately needed elsewhere. Communal kitchens were set up to keep alive the large number of Jewish refugees, and Jews who were better off would assist in cooking food for them.

In May 1943, a ghetto was established. Unlike many ghettoes set up by the Germans, this one was not physically separated from the rest of the city. The edict establishing the ghetto demanded that ‘stateless refugees’ relocate to this area; no explicit mention of Jews was made, although the qualifying stateless refugees in Shanghai were almost exclusively Jews. Relocation to the ghetto made conditions harder for Eisfelder’s parents, as they had to close their café. Luckily, they were able to reopen at a new location, and soon they were getting customers again.

Eisfelder’s closest encounter with death and violence during the war ironically took place during the Allied bombing raids in mid-1945. There was much destruction, including in the Jewish area of Shanghai. Many were killed and hurt, but everyone in Eisfelder’s family escaped unscathed. The Japanese surrender on August 15, 1945, saw the end of the war for Eisfelder. He soon set to work trying to find a way to leave China, although he ended up remaining there until May 1947, when he emigrated to Australia.

Eisfelder’s story is vividly told and immensely readable. His unusual story is presented in great detail, and the reader is introduced to places, people, and a culture that are unfamiliar to many. The inclusion of historical background in parts of the book helps the reader to understand life in a city so far from the places usually associated with the Jewish experience of World War II.