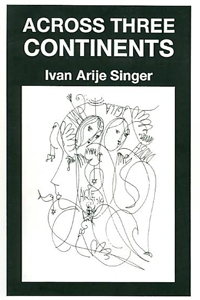 Across Three Continents is the life story of Ivan Arije Singer and his wife Naomi. Aside from a section about Naomi's background (pages 27-56), the book is autobiographical. Only pages 1-26 address Ivan's life during World War II. The remainder of the book, pages 57-320, deals with Ivan and Naomi's post-war lives in Israel and their subsequent establishment of a farm in Australia. Ivan wrote the book to provide his family with an account of his life. It is composed of sections written at different stages in his life, and was published privately in 1994.

Ivan Arije Singer grew up in Budapest, Hungary. He experienced anti-Semitism from an early age, from both his teacher and his fellow students. When the Germans entered Hungary in 1944 all Jews were forced to wear a yellow star. When Ivan went to school wearing the yellow star, he was told that Jewish children were no longer permitted in the school. Ivan's parents then gave him a false name and false papers and sent him off to a school run by French Catholic priests. After a couple of months his parents returned and took him to a crowded 'yellow star house' where they were living. Ivan discovered after the war that all the priests were eventually killed by the Nazis. After Hungary was taken over by the fascist leader Szalasi, Ivan's father arranged for Ivan to be placed in the care of one of his workers. After discovering that the worker's husband was an anti-Semite, Ivan returned to his family. One day Ivan's parents were marched down to the Danube to be shot, but were miraculously saved by a Spanish diplomat. As the Russian front approached, Ivan's family ran out of food. It was a race against time as to which would come first, starvation or liberation. Liberation did not end the chaos as the Russian troops were known to be trigger-happy and partial to looting and rape. By threatening to report them to the Russians, Ivan's father was able to reclaim the family home from its occupiers. Ivan eventually left Hungary for Israel, where he lived on a kibbutz and served in the Israeli Defence Forces, before settling in Australia.