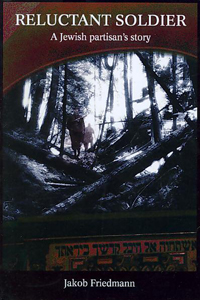 Reluctant Soldier tells the story of the wartime adventures of Jakob Freidman. The first 24 pages portray Jakob's experiences in Wlodawa under German occupation. Pages 25-68 tell of his adventures as a partisan fighter while pages 69-79 depict his time in Europe after the war. The remainder of the book, pages 80-100, outline his new life in Australia. Jakob's story was recorded while he was in hospital dying of cancer. It was published as a book by Makor Library in 2005.

Jakob Friedmann (Rotenberg) was born in the small Polish town of Wlodawa in 1925. The Jews of Wlodawa were very traditional in their observance and Jakob received a solid religious education. When the war began in September 1939, residents discovered that the local Polish General was a German collaborator. Soon after the Germans arrival, Jakob's brother was run over and killed by a German truck. After a trainload of German Jews was executed nearby at the future site of Sobibor, Jakob helped retrieve and bury the bodies. Life for Jews became more difficult as they were subject to severe restrictions. One day Jakob's father was kidnapped and used for German experiments on artificial food. He returned soon after but died a painful death. Jakob worked for a forced labour detail draining a swamp. In 1942 children in Wlodawa were rounded up and sent to Sobibor. Rather than go to the death camp, Jakob's younger brother jumped into a burning bonfire. He was pulled out and died six months later from his wounds.

In October 1942 the liquidation of the ghetto began. Jakob, in favour of a more activist approach to survival, escaped to the woods. The next day his mother and sister were captured and sent to the gas chambers. Jakob and his companions survived in the forest by stealing food from farmers. Jakob heard that there were Jews working on the farm of a Polish aristocrat and so went to join them. One day, the SS came to the farm, killing anyone that they could find, including Jakob's grandfather. Jakob, despite suffering from typhus, managed to hide in a hayloft.

Thinking that his only hope was to arm himself, Jakob set out for a man he knew sold weapons. The dealer had no weapons to sell but invited Jakob to join the partisans. Fearing that the partisan's were going to kill him, Jakob escaped with one of their pistols. Upon reaching a village, locals refused to help him because he was a Jew. After drawing his pistol at them, they were persuaded that he was partisan. Jakob eventually joined a group of partisans in the forests. Soon after joining he ambushed and executed a Polish policeman from his hometown who had collaborated with the Germans. After his group of partisans was betrayed and attacked by the Germans, Jakob shot his way to freedom before executing the collaborator. Jakob then joined a more activist and organised partisan group armed by the Russians. One day, in the heat of battle, Jakob deliberately killed a fellow partisan in his own line, a Ukrainian anti-Semite.

Jakob describes his life on the run as a partisan: the battles, the bombing of German trains and the execution of collaborators. His group eventually met up with Russian forces and after the war he was made Deputy Commander of his home town. Unhappy with life under the Soviet regime, Jakob moved to American-occupied Germany. He eventually immigrated to Australia in 1951.

Moving along at a rapid pace, Jakob Freidmann's story is a thrilling tale of daring, courage, and vengeance. His experiences as a partisan are retold with concision and power, his heroism recalled without fanfare.