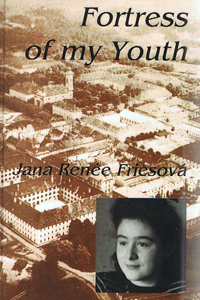 This memoir is primarily devoted to the experiences of Jana Renee Friesova, a young Jewess from an assimilated Jewish family in Czechoslovakia, during the Holocaust. Beginning in 1937, the first 70 pages of the book revolve around Friesova’s two pre-war childhood homes: that of her parents in Josefov, and her grandparents’ home in Mnichovo Hradiste. In the following 100 pages, Friesova relates her experiences in the Terezin concentration camp. The final 20 pages are the only part of the book devoted to Friesova’s life after the war. The book, which was translated from Czech by Elinor Morrisby and Ladislar Rosendorf, was published much later in Friesova’s life, in 1996. It is written in a generally, but not strictly, chronological manner. Friesova lucidly intertwines stories from earlier periods into those of later periods, when they are relevant to her feelings or experiences at that time.

Friesova was young when the Nazis invaded Czechoslovakia and began placing restrictions on Jews. Until then, she and her family travelled freely between her two ‘homes’. Friesova talks about how her non-Jewish friends slowly began to distance themselves from her. She describes the private lessons she had at home because Jews were banned from schools, and how it became more difficult for her and her family to see her grandparents. Meanwhile, other Jewish families were moved into their house, which gradually became more and more crowded. Slowly, deportations began to the Terezin concentration camp. Friesova found herself, at the age of 14, caring for two children whose parents had been deported. Eventually the children were also deported, as was Friesova’s family.

During this difficult, lonely period, Friesova befriended Jarmila, a non-Jewish girl from the town of Jesenny. While their long-distance friendship lasted only a few years, it clearly had a strong effect on the young Friesova. She speaks of her gratitude to this girl, who died at a young age from a serious illness.

In 1942, Friesova and her family were deported to Terezin. Describing in great detail the terrible conditions there, Friesova also depicts the cultural and educational activities of the Jews in the ghetto. She describes the education she received in the ghetto from devoted teachers who were destined to be murdered at Auschwitz, and the plays and musical performances which were put on by Jews.

Friesova’s account is overwhelmingly personal. She describes her feelings about individuals and events, bringing alive the ghetto experience. In this way she discusses her relationships with her parents and friends, her first serious romantic relationship, and the difficulties of living in squalid, overcrowded conditions, surrounded by death. She describes the hardships involved in trying to maintain relationships with those around her, while friends and family were regularly being deported from the ghetto to the ‘east’ – most of them never to be seen again. Friesova’s intensely personal tone is complemented by her personal ruminations and reflections on specific events. She philosophises about life and love, death and hardship, and speaks with incredible honesty about her relationships with others, including her parents.