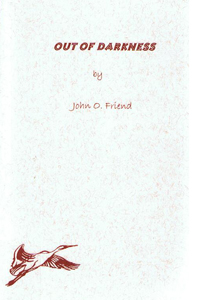 Out of Darkness tells the life story of John Friend. Pages 22-118 describe his life in various towns near Cluj. Pages 11-21 and 119-159 tell of his time as a prisoner first of the Hungarians, and then the Russians. Pages 160-213 depict the rebuilding of John's life in Europe after the war, while the remainder of the book, pages 213-409, deals with his new life in Australia. John Friend wrote his memoirs late in life and they were published privately in Melbourne in 1998.

John Friend was born in 1920 and grew up in a town near Cluj in Romania. Although John's family spoke and considered themselves Hungarian, the area where they lived had been allocated to Romania at the conclusion of World War I. The area was extremely conservative in regard to social ettiquette. Children were 'better seen and not heard' whilst John dared not even hold hands with his girlfriend. John's father was a lawyer and the family enjoyed a comfortable existence. Owing to anti-Semitic attitudes of the teachers, John and other Jews were prevented from achieving good marks at school.
In 1940 Hungarian troops reoccupied the area where John lived. Being Hungarian patriots, John's family initially welcomed the new rulers. The Hungarians, however, brought with them harsh anti-Jewish legislation, preventing his father from openly running his legal practice. With his career prospects limited, John studied to become a photographer.

In September 1941 John was drafted into the Hungarian military. The Jewish draftees were soon separated and sent to forced labour camps. John was put to work building a railway line near Zsibo. All the while the prisoners faced the prospect of cruel punishments from their sadistic guards. In the summer of 1942 John was granted leave to go home only to discover that, owing to increasing anti-Jewish legislation, his non-Jewish girlfriend no longer wanted to see him. From late 1942 John's labour battalion began moving between various sites in occupies Europe. In Stanislawow, Poland, he witnessed Jews being harassed into a ghetto. As the Soviet front advanced, John's group was due to be transported west. Instead John managed to hide in a church until he was liberated by Russian soldiers in July 1944.

Much to his surprise, however, John was robbed and then arrested by the Soviet troops. He was force marched over 500km to the east before being taken to a camp at Zubova poliana. During his time as a Soviet prisoner John contracted malaria. It was only in October 1945, well after the war had finished in Europe, that John was allowed to return home. There he discovered the full horror of the Holocaust. His parents did not survive and his home was now occupied by strangers. John rebuilt his life in Romania and Hungary before fleeing the oppressive governments in 1948.

Out of Darkness paints a vivid picture of life in an ethnically complex region. On a few occasions the book deviates from strict chronology however the story remains easy to follow. John Friend aptly portrays the cruelty of the forced labour camps which, ironically, probably protected him from death at the hands of the Nazis.