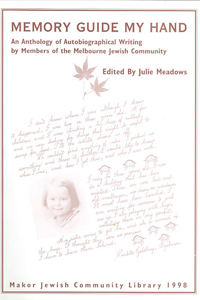 Memory Guide My Hand is a short anthology of 22 autobiographical pieces of writing. The work came about as a result of Makor Library’s “Write Your Story” project. Julie Meadows, the editor of the anthology, had previously been involved in teaching English to new immigrants. She had found autobiographical writing to be both educationally effective and well received by her students, and came to believe that a workshop on such writing in the Jewish community would be worthwhile. Indeed the project was well received; at the time that Memory Guide My Hand was put together, the ’10 week’ course was in its 24th week. Many of the participants in the project went on to publish their own books. Memory Guide My Hand contains short pieces by various members of the Jewish community. 13 stories in the book relate in some direct way to World War II. Of these, eight are written by survivors themselves, and these will be summarised briefly here:

Kitia Altman: Peace and War (p7-10)
A moving piece of writing, split into two parts. The first part describes Altman’s family before the war; a normal family with normal joys, normal sorrows and normal problems. The second part is about the imagination that kept Altman able to hope during the war. Whilst doing forces labour in a place called Beensdorf, Altman imagines the free life of a woman who she sees through a window.

Doba-Necha Cukierman: Anzacspeech (p14-16)
Cukierman presents the text of a speech that she gave on ANZAC Day at Cheltenham Secondary College, the school where her daughter teaches. Cukierman, from Lublin in Poland, briefly tells of her experiences in hiding during the war and the large family that she lost, including her young daughter. She then goes on to talk about the importance and meaning of writing for her, both during and after the war.

Paulette Goldberg: Fragments (p20-21)
In this short but compelling piece, Goldberg presents four ‘fragments’, short memories from her childhood. Three of the anecdotes she recalls are from during the war years, when she was three, six, and seven years old respectively. The fourth tells of the difficulties she faced in her new country, Australia.

Guta Goldstein: Macaroons and Bitter Herbs (p25-28)
Goldstein writes of the importance of the Passover festival in her life, and the different circumstances under which she has celebrated it (or not celebrated it). She movingly compares the festive Passover meals that she shares today with her children and grandchildren in Melbourne, with Passover of 1941 in the Lodz ghetto.

Lucy Gould: In the Name of the Third Reich (p29-31)
Gould was born in September 1940 in Lvov, Poland. Her brother, father, and extended family all died during the war. Only she and her mother survived, by obtaining false papers that identified them as Polish gentiles. Gould relates the memories that she has of the difficult times. In part, the memories are her own, but she fills in gaps with information that was told to her later by her mother.

Rae Mandelbaum: A Story of Two Cities in World War Two; Vilna: The Beginning – Bergen-Belsen: The End (p39-42)
In the first part of this piece, Mandelbaum tells of her life at the beginning of the war in Vilna, at first under Polish rule, then Russian, and finally, Lithuanian. The second part describes the eight days that Mandelbaum spent at the Bergen-Belsen death camp, until liberation by the British, and the difficulties faced by the inmates after being liberated.

Marianne Roth: Kristallnacht 1938 – The Sister’s Story (p48-50)
Hans Friend: The Night of the Crystals (Die Kristallnacht) – The Brother’s Story (p50-52)
Marianne Roth and Hans Friend are siblings. Both were born in Germany, and lived in Berlin in November 1938, at the time of Kristallnacht. The two children, neither of whom ‘looked Jewish’, walked the streets of Berlin and witnessed the devastation. Roth and Friend were both evacuated from Germany before the war began; Roth to Australia, Friend to England. In their different accounts, each tells their own perspective of the violent outbreak of anti-Semitism that occurred in Germany in the 1930’s. Their entire family was murdered during the Holocaust.