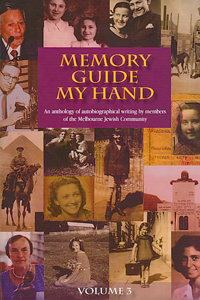 Memory Guide My Hand Volume 3 is the third in a series of anthologies published by the Makor Jewish Community Library as a part of their “Write Your Story” project. The project facilitated the writing of autobiographies by members of the Melbourne Jewish community. Many wrote books which were published. This volume, 367 pages in length, contains some short autobiographical stories, and some excerpts from full books that have been published separately. It contains thirty diverse and varied stories, thirteen of which are about the war years and are written by Holocaust survivors. It is these thirteen that will be briefly summarised here:

Berti Burger: Working on Hitler’s Secret Weapon (p19-36)
Berti Berger describes life as a child in Oradeamare, Hungary, until the arrival of the Germans in April 1944. He tells of the establishment of the ghetto and the evacuations which resulted in his separation from his family, and his internment in Auschwitz, Fallersleben, Dora and Bergen-Belsen, where he was liberated by the British on April 16, 1945.

Fanny Cooper: Crossing the Lake (p59-66)
Cooper’s memories were triggered upon finding in her house a story that she had written as a young girl. She had fled Belgium with her family in May 1940 after the Nazis invaded, for Nice, in southern France. Once the regime there began to round up Jews, they went into hiding, until they managed to procure false papers and escape to Switzerland. Cooper reproduces in translation the story she wrote as a young girl about these events.

Zosia Gettler: Luck – A Survivor’s Tale (p95-110)
Guttler escaped Poland with her husband, Kuba, after the Germans arrived in Warsaw in September 1939. They crossed the border into the Soviet Union, where they spent the remainder of the war. Starved, Guttler was unable to feed her baby daughter, who died at the age of 11 months. After the war, they returned to Poland to find that their entire families had been killed. Subsequently they moved to France, and then to Australia.

Marika Goldfayl: The Orphanage (p111-126)
Marika Godlfayl was born in 1934 and was a young girl when the Germans entered France. Her father went to work in Germany, pretending to be a non-Jew, her mother went into hiding, and she was put in a convent. Conditions in the convent, which was primarily for orphans, were bad – there wasn’t enough food, and they seldom were able to wash. Eventually, Marika was able to join her mother in hiding on the summer property of a prominent businessman. After the war, they were reunited with her father as well.

Herszel Goldwaser: The Dzialosyce Affair (p127-136)
Born and raised in the small town of Dzialosyce, Goldwaser was deported in September 1942 to Miechow labour camp. From there he was taken to a series of camps: Plaszow, Skarzysko-Kamienna, Sulejow and Buchenwald, Schlieben and Mauthausen. He was liberated at Mauthausen on May 5, 1945.

Sonia Guss-Hornstein: The Wild Man (p145-154)
When Chelm, Sonia’s home town, was invaded by the Germans, she and her family were taken to a series of labour camps, until they were put in the ghetto in Tuchin. Soon, they heard rumours that the ghetto would be liquidated. Together with many other members of the town, they escaped and hid in a forest, living in a bunker for the following two years. After liberation by the Russians, Sonia and her family went to Lodz. She describes her confusion upon seeing, from her bedroom window, a group of men ambush and beat to death another man. Her father told her the next day that he had been a kapo.

David Kay: Tough Kid (189-204)
David Kay was born in Slonim, at the time a part of Poland. When war broke out he was deported to Achinsk, in Siberia, along with his mother and brother. His father was arrested – he never saw him again. Kay describes the conditions in Siberia, and the mischief that he would get up to as a child. His brother Sam went into hiding in order to avoid serving in the Red Army; they were reunited in May 1945, on their return to Poland at the end of the war.

Alexander Kovach: Growing Up in Zagreb (p229-238)
Kovach describes life in Zagreb, Yugoslavia, before the war. Though there was some anti-Semitism, he says, it was not as bad as in Poland or Russia. When the Nazis invade Zagreb in 1941, Kovach finds out that an uncle of his, whom everyone had thought was a German Jew, was in fact an S.S. man – a ‘fifth columnist’. Soon, the Ustasha came to arrest Kovach’s brother. Since he was not there, they arrested Kovach instead, and he spent four months in prison. After release, he obtained fake papers, and due to his knowledge of other languages, was able to join the underground, initially as a messenger. Late in the war he was injured in battle when he took a bullet to the knee. After the war, he migrated to Israel before coming to Australia.

Maria Lewitt: Scrawny Little Thing (p239-248)
In the Autumn of 1944, Maria Lewitt had already been liberated by the Russians, though the war was still going on elsewhere. At that time, she was working as the assistant to a woman who was running a Jewish orphanage. She tells of one particular girl in the orphanage who was especially reserved, and did not communicate with anyone else. The arrival of a visiting Polish government minister at the orphanage results in a moving moment for the young Maria Lewitt.

Chana Oshlack: A Night in Zelechow (p295-304)
Born in Warsaw and 16 years old at the start of the war, Chana Oshlack’s short story relates an incident that took place after the war was over, one that was “more terrible than the nights in Majdanek and Auschwitz, where I spent almost two years.” After liberation, Chana went looking for family members in various parts of Poland. In Zelechow, she witnesses the killing of Jews by a group of Poles. A friend who had accompanied her to look for her family was amongst those killed. Chana herself was shot and lightly injured, but managed to escape and survive.

Hartog (Harry) Philips: Growing Up in Goenlo (p305-324)
Philips begins by describing Goenlo, the small town in Holland in which he grew up, and discussing his family and his life before the war. Philips survived with the help of a Protestant minister, Reverend Leen Overduin, who found and organised places for many Jews to hide. Philips hid with the Migchelbrink family for two years, and remained in contact with them after the war. He reflects on the reasons that these people might have risked their own lives to save his. When he visits them, he says, they make him feel as if it was he who did them a favour by letting them save him.

Sarah Saaroni: Fulfilment (p335-344)
In 1942, Sarah was in Hamburg, Germany on false, ‘Aryan’ Polish papers. She was betrayed by Polish acquaintances, and sent to Majdanek, though she managed to escape before arriving there and take on a new Aryan identity. In this short story, she describes her inability for many years to speak about her experiences. Her silence ended when she took up sculpting, decades later. Through art, she was able to express herself properly for the first time; this ultimately led her to write down her experiences in 1987.

Sue Wright:Liberation and Beyond: Snapshots of Vienna in 1945 (p357-367)
Sue Wright lived through the war in Vienna. Daughter of a Catholic mother and a Jewish father, she was considered a mischling and was banned from school, though she was able to work. Her father was taken away in 1942 – she never saw him again. Wright describes the fear and chaos before liberation by the Russians, and life in Vienna in its immediate aftermath.