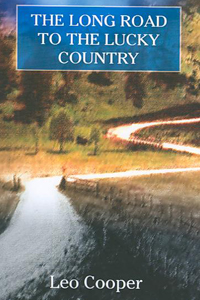 The Long Road to the Lucky Country tells the life story of Leo Cooper. The book is an expansion on Leo Cooper’s earlier book about his wartime experiences, Stakhanovites – and others (Hudson, Melbourne, 1994). Additions to the first book include a larger section on pre-war Warsaw and an extra ‘book’ about life in Australia. After a brief prologue, pages 17-65 detail the rich Jewish life in pre-war Warsaw, while pages 55-78 depict the city under German occupation. Pages 79-108 tell of Cooper’s escape to the Soviet Union, his time in Minsk, and his subsequent flight to Urgench. Pages 109-122 portray his time as a military labourer in Komarowo and Borowichi, while pages 123-153 describe his painful return to Danzig and Warsaw. The second ‘book,’ pages 163-331, tells of Cooper’s emigration and new life in ‘the lucky country,’ Australia.

Leo Cooper was born in Warsaw, Poland. Following the German occupation of Warsaw, Cooper separated from his family and fled eastward. After reaching Bialystok, Cooper enlisted himself for work at a Soviet labour recruitment office. As a qualified turner, Cooper was guaranteed employment. Hoping that the city he was allocated to was not in Siberia, Cooper boarded the appropriate train, not having any idea about Russian geography or where exactly he would end up. After a brief stay in Propoist, Cooper found work in a brick factory in Minsk. Cooper enjoyed a comfortable job, and over time became acquainted with the Russian language and culture, as well as the overbearing shadow of the Soviet government and its bureaucracy. He was a respected worker and took part in administration meetings.

While in the Soviet Union, Cooper initially hears only snippets of information on events occurring back in Poland. At one point Cooper forgoes a romantic relationship with a local girl, overcome by feelings of guilt that while he is enjoying himself, his family is suffering under Nazi rule.

When the Germans attacked Russia in June 1941, Cooper again fled eastward. He escaped at fifteen minutes notice with a work colleague in a company truck. The road was full of refugees while German bombing raids were a constant threat. He reached Moscow where the Russians were busy preparing for the German onslaught, awaiting the help of ‘General Winter,’ who had earlier defended Russia against Napoleon. Convinced that he would not survive the freezing temperatures, Cooper headed south to warmer climes.

After a long journey Cooper reached the Uzbek town of Urgench. After failing as a labourer on a collective farm, Cooper found a job as a fitter and turner for an irrigation company. Despite his steady job, food in Urgench was sparse and Cooper was constantly hungry. No sooner had Cooper recovered from bouts of malaria than he was conscripted into the army. He was placed into a work battalion and taken to Komarowo. At one point Cooper was forced to become an informant for the Soviet security services. Cooper was later transferred to Borowichi, where he remained until the end of the war.

He was repatriated to Poland where he stayed with his cousins in Danzig. Cooper soon discovered that Polish anti-Semitism was still rife and knew that he had to leave Poland. He recited kaddish (a Jewish prayer of mourning) over the ruins of his family home in Warsaw, before escaping to displaced persons camp and then on to Brussels. Cooper spent three years in Brussels, where he was married, before immigrating to Australia.

The first half of The Long Road to the Lucky Country is the fast-paced adventure story of a Polish Jewish refugee. Complementing the central narrative, the book is replete with insightful observations on the nature of the Stalinist government, the Russian people, and the relationship between them. While containing less narrative detail than the wartime experiences in Cooper’s first book, it adds a extensive portrait of pre-war life as well as reflections on the experience of the survivor.