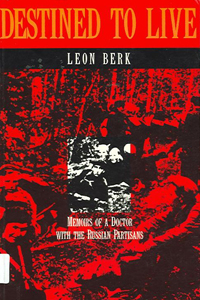 Leon Berk’s compelling autobiography tells of his experiences during World War II, first as a medical student, then in hiding from the Nazis, and finally as a doctor working with the Russian partisans. The first 28 pages of the book deal with the pre-war years in Eastern Poland and Berk’s travels to Italy and Lvov as a student of medicine. Some 62 pages recall the Nazi invasion of Eastern Poland and the formation of a ghetto in Baranovichi. The next 126 pages relate Berk’s flight from the ghetto, his time in hiding, and his life as a doctor with a Russian partisan unit. The remaining 15 pages describe liberation and Berk’s subsequent migration to Israel, and later Australia. The memoir was first published in 1992.

Leon Berk, born Leonid Berkowicz, was a member of the Jewish community of Baranovichi, Poland, which came under Russian rule when Poland was divided in 1939. Berk, who had been studying medicine in Italy, was in his hometown for the academic break when the Russians took power. He resumed his studies in Lvov, also in Poland, and graduated in 1941. Ironically, Berk had previously been unable to study medicine in a Polish university because he was Jewish. Shortly after he finished his studies, massacres of Jews began in Lvov. Berk and his friend, Shurka, walked for three weeks to get back to Baranovichi.

His family confined to the ghetto, Berk spent his days working at a local hospital administered by the Germans. Soon enough, even the doctors were moved to the ghetto. Berk’s friend, Shurka, as well as his brother-in-law, also a doctor, were killed in a rounding up of doctors by the Nazis, ostensibly to work at a P.O.W. camp. Berk escaped, and went into hiding.

As news of the many atrocities taking place in the region reached Berk, he became despondent. Feeling hopeless, he felt that the only thing left to do was fight, but he had no weapons or contacts. Finally, with the help of his father, Berk managed to leave the ghetto for the house of a local peasant, Pashka, who promised to help him join the partisans. Unfortunately, the Polish partisans did not want him because he was a Jew. In the meantime, all of the Jews of Baranovichi were murdered by the Nazis; Berk could hear the gunshots of the Einsatzgruppen for several days. After remaining in hiding, working for Pashka for a long period, Berk finally managed to join a group of Russian partisans.

Slowly, Berk was able to win the trust of the unit and become an integral part of the organization. He remained relatively secure amongst the partisans until liberation by the Red Army in 1944. Berk offers a detailed, disturbing account of partisan existence, emphasizing the simultaneous humanity and brutality of the partisans. He describes the difficulty of practicing medicine with limited means, and dwells on the ability of a universalistic, Communist ideology to overcome deep-seated anti-Semitism amongst the partisans. Although mention is made of other Jewish survivors and the existence of a Jewish family camp nearby, the focus of the account remains on the members of the partisan unit, reflecting the relative isolation of Berk’s experience.

The book is written in descriptive, articulate, compelling prose. Every character appears as a multi-dimensional, complex person. The book’s preface, originally published as an article in The Age newspaper, was written by journalist Vitali Vitaliev. Vitaliev describes how he came to read a manuscript of the book almost by accident, and was taken aback by its incredible lucidity and attention to detail. Destined to Live is a gripping, moving, eloquently written account of Berk’s war experiences.