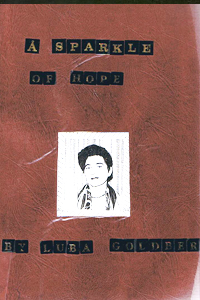 This 172-page autobiography tells of Luba Goldberg’s experiences in Poland during World War II. The first 30 pages describe Goldberg’s life before the war and under Russian rule; 57 pages tell of life under Nazi occupation and Goldberg’s escape into the forests; 40 pages deal with Goldberg’s experiences living with Russian partisans; the final 43 pages cover liberation, life in Poland under Russian rule before the war ended and, finally, Goldberg’s immigration to Australia. The book was written late in life and printed privately in 1998. It is divided into two parts, each of which is subdivided into smaller chapters.

In the first section of A Sparkle of Hope, Goldberg discusses what she remembers of her childhood in Chiechanowiec, a small town in eastern Poland. She describes her friends and family, and the small-town politics that existed in Chiechanowiec. In 1937, in order to continue studying, Goldberg moved to Bialystok. After finishing school in 1939, she returned again to Chiechanowiec. She now began to feel the tension that marked the beginning of the war. Soon, the Russians invaded. Goldberg describes life under the Russians, and her struggle to continue studying, even though she had not previously known Russian. She ultimately succeeded, and after finishing her course, began working in a Russian taxation office. Despite the hard conditions, Goldberg states that most people were happy under the Russians because all members of the population had equal rights.

The year 1941 marked the beginning of the war for Goldberg. In June of that year, she heard German planes bombing her part of Poland for the first time. She vividly describes the terrible destruction caused by the bombing. People she had seen alive and well only minutes earlier, were killed or maimed in a matter of seconds. Goldberg’s mother soon sent her to Wysoko to live with her aunt, and from there she then moved with two of her uncles to Sokoly, where conditions for Jews were said to be slightly better than other towns in the area. Nevertheless, the inhabitants of the Jewish ghetto in Sokoly lived under brutally harsh conditions, and suffered from constant fear of the Nazi occupiers.

Unlike in many small towns, the people of Sokoly became aware of the fate planned for them before deportations to the death camps began in earnest. Through reports from escapees from neighboring towns and Polish train drivers, the inhabitants of Sokoly came to realize that the Jews from their entire region were being transported to Treblinka, where they were being murdered. In early November 1942, panic set in when it became clear that Sokoly would be liquidated in the coming days. At this point, Goldberg decided to flee to the surrounding forests.

Goldberg describes in great detail the events and experiences that she went through as she hid in the forests. She describes the help she got from a number of sympathetic Poles, and throughout the book continues to praise God for being at her side; one gets the sense that her religious faith helped her to remain strong during those unimaginably difficult years. Goldberg obtained sustenance by roaming from house to house, doing odd jobs such as sewing or cleaning. She describes the many and varied families and people that she met; some were openly anti-Semitic, some were merely afraid to help Jews, others risked their lives to be of some help towards Jews like Goldberg.

Joining the Russian partisans in the forests was the last hope of surviving for Goldberg and in late 1943, in Bransker Forest, Goldberg and her friend Toiba indeed found and joined a group of Russian partisans. They cooked and cleaned for the Russians, and in return they were kept safe from the Germans. Goldberg remained with the partisans in the forest until liberation, which for Goldberg took place in August 1944. After liberation, Goldberg moved to Bransk with a group of Jews who had also survived in the forests. Life under the Russians while the war was still progressing was still precarious; Goldberg moved from place to place once again. In May 1945, in Biatystok, Goldberg got married. She describes her life in Biatystok with her husband and subsequently describes their search for a future, and later their arrival in Australia.

Luba Goldberg mastered several languages during the course of her life, and her English is very good. It is not, however, her first language, and this does come across in the linguistic style of the book. Far from detracting from the narrative, this gives it a genuine feel; it is Goldberg’s voice, and no one else’s, that one hears on the pages of this book. Her style is descriptive, and she often provides character sketches, making the many people who Goldberg met come alive for the reader. This book provides a fascinating, though often depressing account, of the experiences and hope of a young Jewish woman from a small Polish town during the years of World War II.