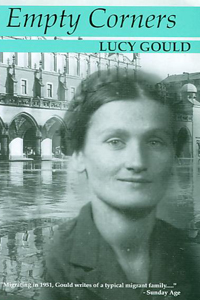 Gould presents a compelling whole life autobiography: 20 pages deal with her parents pre-war life in Lwow; 10 pages recounts the experiences of the writer and her mother in Krakow during German occupation; 50 pages describe life at 39 Friedleina street as a child in Krakow from 1944 until 1951; 25 pages describe life in Israel; 100 pages details her experiences in Melbourne and briefly London. Gould’s autobiography is also a biography of her mother Genia Preminger. Published by Gould herself in 2000, and distributed by Makor Jewish Community Library, it represents a journey of survival, regeneration and self-discovery.

The book begins with her parents’ life in pre-war Lwow. Gould’s mother Genia Schindler, born in 1916, married Jozek Preminger, a commerce graduate and accountant on 8th September 1939, one week after the invasion of Poland. They had two children, Lucy born in 1940 and Jeruchim in August 1941. However, very soon after, Gould’s father and brother were both taken by the Germans, in separate incidents and never seen again. Consequently the bond between Gould and her mother became even stronger and more desperate. In 1942 they left Lwow for Krakow, living a nomadic existence and inhabiting 14 different apartments, as they constantly found themselves in threatening situations. They disguised their Jewish identity by living on Aryan papers, provided by a Polish gentile whose contacts included the Polish underground resistance. Her mother assumed the alias of a peasant girl, Zosia Len, and Gould changed her name from Leiba to Lucyna. Her account of the war years is understandably brief, given her age at the time and therefore her limited recall. The use of exact dates, other than years, is infrequent. Her narrative is a mixture of reconstructed memories and anecdotes provided by her mother and friends. The post war narrative moves from life in Poland, Israel, Melbourne and London where Gould meets her husband Cedric.

Lwow was under Russian occupation until the German invasion of 1941. Immediately the lives of the Jews were devastated. Genia survived the war by trading on the blackmarket. She smoked and drank vodka to enhance her “Aryan” charade, altered her hair and speech to disguise her Jewishness and openly flirted with male gentiles to avoid suspicion. She constantly made new social contacts, never becomingly closely attached to any one person and moved between social groups in order to avoid close scrutiny. This ultimately became their key to survival.

A few months before the war ended, Lucy’s mother applied to the Ministry of Housing for a flat in Krakow. In her application she gave her maiden name of “Schindler”. She was immediately granted a flat in Ulica Friedleina. Gould now suspects that their good fortune emanated from Oskar Schindler’s influence in Krakow at the time, and that, by a quirk of circumstance, the name Schindler was deemed German by the ministry bureaucracy. They were able to remain in their Krakow flat until 1951 when they finally left Poland to emigrate to Israel. During their years in Krakow, both Gould and her mother continued to live as Catholic Poles, with Gould attending a Catholic primary school and instruction in Catholicism. Her mother justified this action by her continuing fear of anti-Semitism which remained prevalent in post –war Poland.

The latter part of Gould’s memoir reveals her new life in Israel with her mother and new father, Danek. Like many others, the family moved to Israel to create a new life for themselves, but after initially finding it difficult to adjust, the family made plans to move to Australia. Gould’s final chapters detail her new life in Australia, including school life, youth, her turbulent relationship with her mother, and her return trip to Israel. Gould’s memoir is a highly personal, self-reflective and detailed account of a Holocaust survivor struggling to reconcile a lost childhood and fragmented identity. She often intersperses her narrative with introspective, italicised commentary on events, both past and present. What remains pivotal is the emotionally charged relationship between mother and child and how this counterpoints the basic struggle for survival. Gould writes with clarity and purpose.