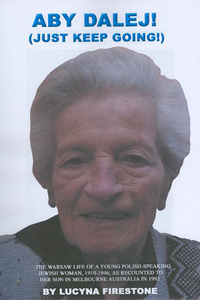 Lucyna Firestone’s autobiography was written in 1992 with the help of family members. Her son conducted a series of interviews with her in Polish about her war and pre-war experiences. The book is the collation of her accounts, translated into English and sewn together into a coherent work. An introduction by Lucyna’s son, Andrew Firestone, fills the first eight pages of the book. Pages 9-58 describe life in Warsaw before the war, with particular focus on important people in Lucyna’s life. Pages 59-68 relate Lucyna’s experiences from the outbreak of war in 1939, including her move to the relative safety of Lwow and subsequent decision to return to Warsaw. Pages 69-96 tell of life in Warsaw—initially in the ghetto but later in hiding on the ‘Aryan side’, until liberation in January 1945. Pages 97-101 are an appendix, written by Lucyna’s sister Anka, describing her experiences after the war. The remaining pages are taken up with photos of family and friends; these are also found interspersed throughout the book.

Lucyna was born in Warsaw in 1910. The first chapters of her book tell of her life before the war, and describe various friends, acquaintances and members of her family. Lucynia also describes the trials and tribulations of her love life, and introduces the reader to her first husband, Marian, with whom she remained friends, and her second husband, Janek. Shortly after the war broke out in 1939, Lucyna moved to Lwow, which was on the Russian side of divided Poland and was perceived to be safer. When Germany declared war on Russia in June 1941, conditions in Lwow quickly began to deteriorate. Food was in short supply, and Jews had to wear armbands indicating their Jewish-ness in public places. A ghetto was established in a poor neighbourhood, but Lucyna and her friends continued living outside. Soon, Ukranian and German officials began to suspect them of being Jewish, and so they had to leave. Unable to move to the ghetto in Lwow as it was too crowded, they instead obtained false papers and made their way back to the Jewish ghetto in Warsaw, in late 1941.

The situation in the Warsaw Ghetto was already bad when they arrived, and got worse quickly. In August 1942, mass deportations to the death camps began. A brief section of the book written by Lucyna’s sister, Anka, describes their final separation from their other sister, Ida. Lucyna and Anka managed to avoid the selection that took away their sister because they had work permits. In early 1943, Lucyna, Janek, Anka, Lucyna’s mother and Marian, escaped from the ghetto—separately but in coordination. They went into hiding in various apartments on the ‘Aryan side’ of Warsaw, sometimes together, sometimes separately. On several occasions they were forced to move when their secrecy was compromised by szmalcowniks, Poles who threatened to turn them in to the authorities.

Lucyna describes hearing and smelling from afar the destruction of the Warsaw Ghetto after the uprising. The Polish uprising in Warsaw, however, she experienced from up-close. When the uprising began in August 1944, exploding shells and stray bullets caused several injuries to people whom Lucyna knew. During the uprising it was dangerous for Lucyna and those hiding with her to leave their apartment, as some of the Polish underground movements were anti-Semitic and would kill Jews if they found them. They hid underground in a cellar, remaining in place even after the insurgents surrendered and the Germans began to systematically destroy Warsaw. On January 15, 1945 Lucyna Firestone and those hiding in the cellar with her were liberated by the Russians.

Lucyna does not write anything about her experiences after the war; her account ends with liberation. An appendix, written by her sister Anka, describes Anka’s involvement in the Polish communist party after the war, and her subsequent expulsion from the movement. Although originally told verbally in response to questions and only subsequently translated and made into book form, Aby Dalej is a descriptive, smooth-flowing, immensely readable book. The tone of the book, the chapters devoted to life before the war and the focus on individual people and social interactions make Lucyna Firestone’s memoir a book that is about ‘normal’ life, even in the most abnormal, tragic of circumstances.