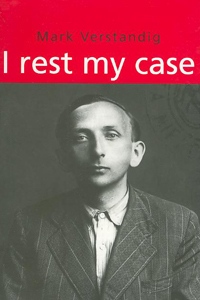 Verstandig presents a whole of life autobiography: some 100 pages deal with the pre-war years in southern Poland, the account centred on Mielec and Cracow; 120 pages with life under German occupation; 70 pages with life in Poland from Russian liberation to 1946, three years in Germany and France, and a brief discussion of experiences in Australia. Verstandig’s autobiography was written late in life. It has been translated into impeccable English by his daughter. First published by a small commercial publisher in 1995, it was reissued by Melbourne University Press in 1997.

The first section of the book deals with life in pre-war Poland. Verstandig, born in 1912, presents a detailed account of his education from cheder to university and of his prosperous circumstances. In 1936 he graduated in law and in his subsequent small town legal career he experienced little discrimination. After German occupation he managed for two years to make a living preparing briefs and representing clients through the connivance of the local legal profession in flouting Nazi dictates. The discussion extends from family history and personal experience to an attempt to explain the political forces shaping Poland’s development. There is also discussion of politics within the Jewish community, with particular reference to Jabotinsky’s Revisionist movement.

The year 1942 witnessed the destruction of Jewish life in Mielec. In March, in the context of rumours sweeping the town, Verstandig escaped to the town on Polaniec. He subsequently reconstructed the events after his departure from accounts of survivors. The Jewish population, numbering 10,000, was ordered to gather in the marketplace, the young men separated while the remaining men, women and children were forced to march to a military airfield seven kilometres distant. On arrival, 1500 elderly women and men, including his father, were shot and buried in a mass grave. Those temporarily spared were crowded together in an aircraft hangar, some driven to insanity. For a period of seven days selections and killings continued; those left alive were transported to towns in the Lublin region.

Throughout this and subsequent accounts there is great attention to detail, including numerous character sketches, depicting a gamut of reactions to the murderous fury, from the Gestapo collaborator who despatched his wife and two children to their deaths in a vain effort to save his life, to the president of the Judenrat of Sandomierz who, when ordered to provide a list of Jews for ‘deportation’, handed over a sealed envelope containing only one name, his own. His reward was a bullet in the back of the neck.

Subsequently, Verstandig details his experiences in hiding on the Aryan side of Warsaw and in remote rural locations. A major interest is the motives of those who assisted Jews in hiding; he writes that there were honourable people, such as a doctor who answered a call to treat his wife after she was shot, but they were few in number.