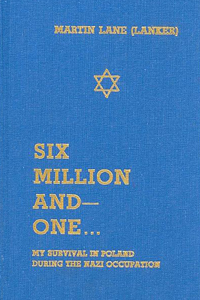 Martin Lane’s memoir tells the story of his experiences as a Jew in Warsaw during World War II. Written in 1971, Lane’s seventieth year, the 132-page account is enriched by reflection upon research undertaken by both Lane himself and established historians. The first 14 pages of the book describe Lane’s life before the war, and the anti-Semitism that existed in Poland already at that time. Pages 15-72 tell of the changes that took place after the German invasion, Lane’s short-lived attempt to leave Warsaw, the establishment of the ghetto, and Lane’s escape from the ghetto after the beginning of mass deportations in July 1942. Interspersed amongst Lane’s story is analysis of Polish anti-Semitism and its origins. Pages 73-115 relate Lane’s experiences in hiding outside of the ghetto, until liberation by the Russians in January 1945. Finally, on pages 116-132, Lane describes picking up the pieces of his life in the aftermath of the war, immigrating to Australia, and he shares some general reflections of his experiences.

In the opening pages of the book, Lane recounts his background of service in the Polish army during the Polish-Soviet War, and his commitment to the Jewish community. He tells of the position he held as First Controller of one of the leading Polish banks up until the time of the German invasion that took place in September 1939. Polish anti-Semitism was rife at this time – even in his workplace, and even in the army, despite the fact that Jewish soldiers had volunteered to fight against the Russians. Lane also makes mention of the kind deeds he did for his caretaker and her family – humane acts that would be repaid to him in time.

Following the German invasion and the devastating bombing of Warsaw, Lane, like many others, fled Warsaw and walked through the Eastern regions of Poland towards the Soviet border. However, soon after reaching the Polish-Soviet border he longed for Warsaw and his family, and thus returned to the city of his birth. On October 2nd 1940, the decree to establish the Warsaw ghetto was given, making official the total separation of the Jewish community that had been developing since the early days of invasion. Lane found himself forced into the hellish lifestyle of the ghetto; he describes the harsh conditions, the overcrowding, starvation and disease. During this time he was made to work in the ghetto hospital and a number of different camps outside the ghetto. In the ghetto, Lane was to suffer the deaths and deportations of several family members including his father, brother, sister, nephew and mother-in-law.

In July 1942 mass deportations from the Warsaw ghetto began in earnest. Lane and his wife were able to escape from the ghetto with the assistance of his former caretaker. They lived for some time in the caretaker’s house, until July 1944 when they moved to a stable near the Vistula River. They hid there along with his sister, brother-in-law, and two others who they did not know, leaving their position only for short periods at night to search for food and water. Once the Russians started to bomb Warsaw, and the Nazis began destroying buildings, Lane and his company took to hiding under the ruins of bombed out houses, moving from place to place in order to avoid both Germans and Poles. During their period of hiding, they struggled to find any food, and it was during this time that Lane’s wife perished

Liberation came for Lane in January 1945, when the Russians took Warsaw. Lane describes the emptiness he felt upon his return to Lodz and Warsaw; there was no longer any semblance of Jewish life. In the final pages of his book, he offers some general reflections on the war, and describes his immigration to Australia.

Throughout his biography, Lane constantly offers reflection and political opinion on matters of which he was not aware of at the time of their occurrence, such as the plans for the implementation of the ‘Final Solution’. He also describes his perspective on events that he witnessed but did not participate in; for example, he relates that he saw the Warsaw ghetto burning in the aftermath of the uprising. Six Million and-One is a well written memoir that balances Lane’s personal experiences with his analysis. It is a book that eloquently reminds us of the horrors of the Holocaust and the evils of which humankind is capable.