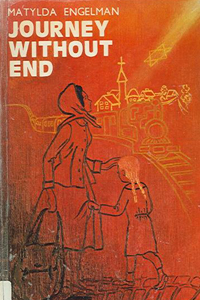 In Journey Without End, Engelman provides an account of her experiences during the Second World War, from the occupation of Poland by German forces in 1939 to the liberation of Austria in June 1945. The first 30 pages deal with the bombing and occupation of Warsaw; the next 30 pages with life in the ghetto at Skarzysko; the following 40 pages with life under an assumed name in Busko and the remainder of her narrative, some 70 pages, deals with her experiences as a foreign worker in Austria. Engelman’s autobiography was written some twenty-five years after her arrival in Australia (1948) and was published in 1977 by a Melbourne publisher. Engelman has also written another autobiography entitled The End of the Journey, which finishes the story she begins here.

Engelman provides little detail of her life before the war, only indirectly does the reader learn of her past history. Her husband, Marek, left for Palestine two weeks prior to the Germans’ advance across Poland. Engelman and her baby daughter Gila were living in their flat in Skarzysko, near the border of Poland and Czechoslovakia, until they could join him.

Engelman’s story begins on the 27th August 1939 when news of the impending German advance caused her and her family to flee from their hometown of Bielsko, where she had gone after leaving Skarzysko, to the comparative safety of Warsaw. She details the bombing of Warsaw and its effects upon the civilian population, in terms of destruction of housing and shortages of food and water. These conditions, and the resulting ill health of Gila, forced Engelman to return to Skarzysko, where she and her family were caught up in the ghettoization of the Jewish population in that area. She recounts conditions in the ghetto, particularly scarcity of food and spreading of infectious diseases. Learning of the impending Nazi removal of children in her ghetto, Engelman obtained a false identity card and escaped from the ghetto, with the assistance of a Polish friend. Posing as a Polish catholic, Engelman travelled to Busko, where she hoped to obtain work so that she might support her daughter. After learning of the arrest of her sisters, Engelman was forced to move on and, with the help of a friend, Dr Dworek, she travelled to Warsaw and from there to Czestochowa. At Czestochowa she obtained a work permit for Germany and placement in Vienna, Austria. After an initially unsuccessful placement as a housekeeper, she settled with a Mr Schultz, a vineyard owner in a township near Brost. A socialist and anti-Nazi, Mr Schultz kept Engelman informed of the progress of the war, through information obtained from British broadcasts. Engelman continued to work at the vineyard until the liberation by Russian forces in June 1945. It is here that she ends her story.

Engelman details her experiences in a simple yet compelling manner, bereft of sentimentality or bitterness. She describes with gratitude the numerous people who assisted her in her flight from the Gestapo, from friends such as Wanda who aided her in her escape from the ghetto, to a stranger on a bicycle who helped her to find accommodation in Czestochowa. Her story indicates that even in uncertain and brutal times a plea for help can be met with humanity and kindness.