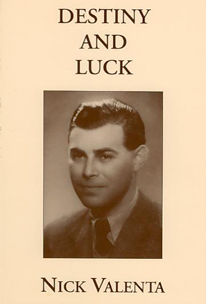 Destiny and Luck is the brief autobiography of Nick Valenta. Pages 5-55 describe Nick’s experiences and relationships in Mikulas, Bratislava, Prague, Prievoz and Piestany, while pages 56-67 portray Nicks residence with a kind family in Sterusy. Pages 68-100 tell of Nick’s time in Bratislava and Prague following liberation. The remainder of the book, pages 101-125, contains a summary of Nick’s new life in Australia. Nick was encouraged to write his story by his interviewer for the Steven Spielberg Visual History Foundation. His book was published privately in 2002.

Nick Valenta (Weiner) was born in Vrutky, Slovakia, in 1910. He studied Law and was married in 1934 before moving with his wife to Prievoz. In March 1938 Hitler annexed Austria. In response, Nick claims that, “I knew instinctively that I had to act quickly to safeguard my family.” He obtained Baptism certificates for his family and enrolled his daughter in a Catholic kindergarten. Nick’s uncle had converted to Catholicism and had important contacts reaching all the way to the President. After the Germans annexed the Sudetenland in March 1939, Nick was able to use his contacts to obtain exemption papers for his family, thus granting them the same rights as Aryans. As conditions for Jews worsened, Nick’s reputation for obtaining documents grew, and he was often begged for help by members of the Jewish community. At great risk to his own safety, Nick helped many people obtain travel documents, passports and birth certificates.

When the Allies began bombing Bratislava, where Nick was living at the time, he and his family relocated to Piestany. In September 1944 they relocated again to Sterusy, where they were hosted by a kind family. In Sterusy Nick and his daughter attended Church every Sunday. Nick’s reputation as a saviour followed him to Sterusy, evidenced when a woman arrived on their doorstep begging for help. The woman and her husband were subsequently hidden amongst the hay in their barn, despite the fact that the building next door was occupied by members of the SS. Nick also managed to have his brother-in-law smuggled out from Bratislava to Sterusy. Eventually the cows ate all the hay protecting the hideout, so the family decided to build a bunker to hide the couple. In the meantime twelve hungry Jews were discovered in the forest. Nick’s hosts were kind enough to protect these new arrivals, and thus 14 people were housed and fed in a secret bunker.

In April 1945 the area was liberated by the Russians and Nick and his family returned to Bratislava. Nick then changed his family name from the German ‘Weiner’ to ‘Valenta.’ He received employment in Prague and was quite successful, however, when the Communists took over the government in 1948, Nick and his family moved to Australia.

In addition to the personal narrative, Destiny and Luck provides the reader with details of historical background events which were occurring at the time. Sparse on personal details and anecdotes, Valenta presents a clear, matter-of-fact account of his life.