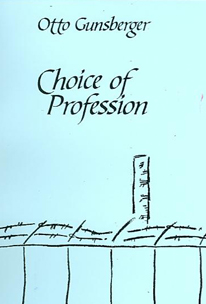 Otto Gunsberger took up his pen to write about his experiences during the Holocaust after years of hesitation. Finally, he decided that before writing a book about the social role of his profession – engineering – he ought to write about the traumatic events that led him into that field in the first place. 133 pages long, Choice of Profession was published in 1990. Pages 1-81 tell of Gunsberger’s time in Auschwitz and Monowitz. Pages 81-118 describe the ‘death march’ that took him to Buchenwald, and the long journey that ultimately found him in a sub-camp of Dachau. Finally, pages 118-133 tell of liberation and Gunsberger’s reunion with his father in Hungary.

Born in 1926 in Budapest, Gunsberger was taken to Auschwitz in April 1944, at the age of 17. His account begins with his arrival at the camp; he does not describe the events that preceded his arrival. He also does not relate how he came to be separated from his father, who remained in Budapest, or what happened to his mother. Upon arrival at Auschwitz, Gunsberger was selected for labour at the Monowitz labour camp. The conditions at the camp were awful; fed less than enough to subsist and forced to work painfully hard, most inmates died within a few months of arrival. Gunsberger’s two uncles, who were also in the camp and with whom he was very close, advise him to try to find a placement in one of the commandos that works outside the camp, thus guaranteeing easier work and possibly access to more food. This way, they suggested, he would be more likely to survive the war—by that stage people already suspected that the war was not going as well as the Germans would have liked and that the end of the war may be in sight.

Soon enough, Kapos and Block Elders in the camp indeed decided to place as many young, strong people as possible in the commandos that work outside the camp, as they had the greatest chance of survival. Gunsberger tells of the stark contrast between work in the camp and outside. Not only was the work easier; he also met civilians in the factory who were opposed to the Nazis and tried to help him as much as they could. In order to do so, they trained him as a welder, and his creative work in this field sparked his first interest in engineering. In order to help his uncles and himself, Gunsberger used the machinery in the factory to secretly manufacture cutlery, which he would then smuggle into the camp and exchange for extra food. Gunsberger describes the profound effect on his self-esteem of being able to create something; indeed he seems very passionate about what ultimately became his life’s work. When performing official duties, however, both he and his co-workers would sometimes intentionally produce shoddy welds, as they did not want to be a part of the German war effort.

As the Russians approached in January 1945, Monowitz was evacuated. Gunsberger and his uncles were taken on a ‘death march’ that took them to an unnamed, evacuated concentration camp near the Gleiwitz coal mines. Here, they were loaded onto a train that took them through Czechoslovakia to Buchanwald, Germany. The trip took over a week, and they were not fed. Several times on the way, however, Czech people threw food into the carriages. At their first stop, this act of compassion appeared spontaneous; later it appeared to have been planned.

From Buchenwald, Gunsberger managed to be selected for a small labour camp. He describes his emotional separation from his uncles, who had been through everything with him until that point. From the labour camp, he was taken to Allach, a sub-camp of Dachau. He was liberated there by the Americans on April 30, 1945. After liberation, Gunsberger lived in an American-run field hospital while he recuperated and began searching for family. Finally, he returned to Budapest, where he discovered that his father was still alive. He describes their emotional reunion, and his subsequent decision to enrol immediately in university to study engineering, in order to involve himself in creative, positive work after his experiences of horrific destruction.

Gunsberger was motivated in writing his book by a desire both to describe the cruelties to which humanity can sink and to tell of the human decency that was able to shine through amidst the killings. He describes the many individuals that he met at length, discussing and reflecting upon their backgrounds, opinions and character traits. He ponders the psychological make-up of Germans, camp inmates and others, reflecting upon the differences between good and evil people, right and wrong actions. Regarding the German and French anti-Nazis with whom he worked outside Monowitz and who sometimes helped him by giving him food to help him survive, Gunsberger states: “I would not thank them as I am sure they would not accept my thanks. Nobody should be specially praised for showing decency while others practiced cruelty.” This unassuming book is an exceptionally thoughtful and insightful reflection on one man’s experiences during one of the darkest chapters of human history.