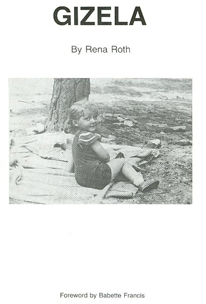 Gizela is a brief (20 pages) but distressing account of Rena Roth’s wartime experiences and the loss of her daughter, Gizela. Rena lived her teenage years in Lodz, Poland, and was married in 1938. In September 1939 Lodz was occupied by German forces, heralding a wave of increasing anti-Jewish persecution. Jews were soon forced to wear yellow stars and were captured and sent to forced labour camps. In December Rena, together with her husband and daughter Gizela, left Lodz for Kielce, where it was hoped that food would be easier to obtain. The Jews of Kielce, however, were soon forced into a crowded ghetto. The Jewish population of the town decreased as more and more Jews were sent away, never to return. The critical moment in Rena’s life came in May 1943 when Nazi soldiers ordered her out of her house. 45 Children were separated from their families before being gunned down – Rena’s daughter Gizela was among the murdered.

In early 1944 Rena was transported to Auschwitz where she was beaten, stripped, shaved and tattooed upon arrival. Rena writes of Auschwitz, “I don’t know who could describe this place or how to begin. If hell exists, maybe this was it; it can’t be worse.” One day Rena recognised her niece amongst the new arrivals on the other side of an electric fence. This filled Rena with hope, days later, however, her niece was sent to the gas chambers.

Rena was relieved of the horrors of the concentration camps in late 1944 when she was handed over to the care of the Red Cross and taken to Sweden for rehabilitation.
Despite a happy marriage, Rena never had another child out of fear that that child could be killed. She wrote these memoirs late in life following the death of her auntie, upon realizing that she was the sole remaining member of her family and would forever remain so. The book was published by Endeavour Publishing in 1988.