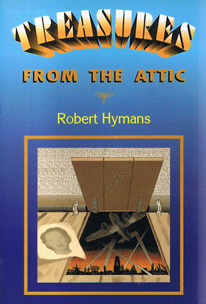 Title: Treasures from the attic
Author: Robert Hymans
Publisher: Self Published
Place of publication: Wodonga
Year of Publication: 1994
Location of Book: Makor Jewish Community Library, Melbourne
Cities/town/camps: Holland: Rotterdam, The Hague, Amsterdam, Belgium: Brussels, Antwerp, Mechelen (b/w Brussels and Antwerp)
Note: those cities/towns/camps underlined are those which are most central to the narrative

Robert Hymans presents an unusual, profoundly human account of his unique experiences in Holland during World War II. Hymans wrote his book late in life, prompted by the death of his wife in 1986. The book is 138 pages in length, and is broken up into chapters. In the first 6 pages, Hymans discusses the death of his wife, and the process that led him to write the book. 32 pages deal with Hymans’ memories of his childhood in Rotterdam, Holland, until the German invasion and the increasing persecution of Jews that resulted. 28 pages focus on the crises of faith faced by the author in his youth, culminating in his decision to convert to Christianity. Following Hymans’ family’s decision to go into hiding in Belgium and his own decision to stay in hiding in Rotterdam, 61 pages describe the life that Hymans led, hidden in the attic of a Dutch Christian family. It also describes his courtship of the daughter of the family who hid him, and their eventual betrothal. The final 10 pages of the book deal with the advance of the Allies and the end of World War II.

Hymans’ story begins with the German invasion of Rotterdam on May 10, 1940. Hymans relates the reactions of the members of his family to the news, and his father’s disappointment; he had had opportunities to flee Europe previously, but had not taken them up. The bombing of Rotterdam caused much destruction, but within a relatively short space of time, some semblance of normality returned to life in the city, with schools and shops reopening. Soon, discrimination against Jews began in earnest; they are made to wear yellow stars on their clothes and forced to live in a ghetto. When deportations of Jews to concentration camps begin, few realise exactly what is happening to those deported. Nevertheless, Hymans’ family develops an association with a Christian church in order to stave off deportation. Eventually, in July 1943, they decide to flee Holland for Belgium, in the hope that they will be safer there. Hymans himself decides to stay in Rotterdam, and goes into hiding in the attic of a Dutch Christian family, the Vaarties.

Hymans describes the time he spent in the attic; he spent much time reading and studying, and came to develop his blossoming belief in the Christian religion. The Vaarties’s oldest daughter, Ans, was one of the few people who would regularly come to visit Hymans. The two became close, and eventually decided to marry. Much of the book is devoted to Hymans’ two passions: his wife-to-be, and his new religion. He stresses that it was because they saw it as their Christian duty that the Vaarties had risked their lives to hide him in the first place.

During the description of the years that Hymans spent in hiding, there is relatively little discussion about the ongoing war and the killing of millions of Jews; due to his isolation, Hymans remained relatively unaware of what was going on in other places. He knew only what he was able to find out by listening to British radio. One exception to this rule is the case of his family. He finds out through correspondence that they have been transferred from Brussels to the Mechelen concentration camp. He worries about them deeply, but – unusually for Jews who remained in Europe during the war – his entire family survived, and they were reunited after the end of the war. Hymans movingly relates his experience of liberation. For the first time in years, he is able to walk in the streets during daylight hours. He finds it hard to walk, and hard to see, but is happy to finally have his freedom. A few years later, he and Ans were finally married, and they ultimately immigrated to the USA, and then to Australia.

In some respects, Hymans’ book is removed from the horrors of the Holocaust; there is no mention of the suffering that took place in the concentration camps, since Hymans spent the entire war in Rotterdam. It is also a relatively upbeat book, unlike many Holocaust memoirs. Hymans’ passion for his new religion and love for Ans helped him to sustain himself during the difficult years he spent in hiding. For him, it seems, those years were years of hope just as they were years of suffering. This unique book touches on many themes, and highlights important tensions and complexities in the remarkable life of Hymans. Treasures from the Attic is a story of immense kindness in the face of horrible cruelty; of a Christian religious awakening by a young man suffering greatly for identifying as a Jew; of companionship in a time of great loneliness; and of love in the face of war.