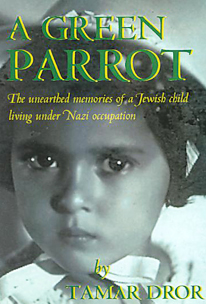 Tamar Dror, born Marusia Cygler, writes about her experiences living in hiding as the illegitimate daughter of a Polish Christian woman named Genia Pajak from the age of 8 to 12, in Bedzin, Poland, and later in a small village near Czestochowa.

This 105 page book is made up of 37 pages of Dror's memoirs and two testimonies made by her in 1945 to the Jewish Institute in Warsaw. The book also includes a preface by Mordecai Paldiel, Director, Department for the Righteous, Yad Vashem, Israel, a 14 page introduction by Kitia Altman, Dror's cousin, who played a major role in both her survival and the completion of her memoirs, and Altman's letter and testimonial honouring Genia Pajak.

In Altman's letter and testimonial to Yad Vashem we learn that Pajak had been helping Jewish families in the Bedzin ghetto by selling their goods to buy them food. Pajak offered to hide her but Altman asked her to hide her 8 year old cousin instead. Shortly before the liquidation of the ghetto in August 1943, Pajak smuggled Dror out of the ghetto and then integrated Dror into her family. It was with Pajak and various others that Dror spent the rest of the war before being liberated by the Russians in early 1945.

Dror's memoirs detail her childhood of fear and insecurity. Following the German occupation of Poland, Dror's family lived in the Bedzin ghetto. When she and her parents were being deported, they managed to jump from the train and returned to the ghetto. Dror lived in hiding with Pajak's help for the next two years. She spent one year caring for cattle near Czestochowa where she assumed the identity of Boguslawa, Pajak's illegitimate daughter. She was moved around to protect her and those who were hiding her. Her memoirs are written in a disjointed style with little factual information such as dates, geographic location or the political climate. It is, rather, the feelings of a small child and the impressions made on her by her surroundings, by the various people who hid her and by the situations she had to face. More of an experiential work, Dror is less concerned with a chronology of dates and facts, than with the emotional consequences of her plight.

The organisation of an exhibition of her father's artwork at Muzeum Zablebia, Bedzin, in 1999 prompted Dror to come to terms with her experience and write her memoirs 50 years after the event. Originally written in Hebrew, they were translated into Polish by Monica Gutman and then into English by Kitia Altman.

Dror's apparent lack of emotion and her inability to acknowledge Pajak is explained in Altman's introduction as a deep psychological suppression of her feelings. Altman's letter to Yad Vashem and her testimonial to honour Genia Pajak provides a detailed description of life in the Bedzin ghetto in 1943 and it also stresses the extent of the risks and sacrifices that Genia Pajak and her family made in hiding Dror. Through Altman's writing we gain some insight into the way a 10 year old coped with the trauma of 'abandonment' and subsequent loss of her parents. She was then sent to a new life in Israel with family who loved her, but not having been through the Holocaust, they did not understand how to help her. This is reinforced by the preface written by Paldiel who points out the devastating and long term psychological effects of the early traumatic experiences of child survivors.