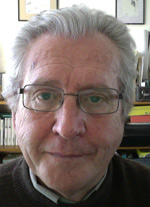 John was at Hong Kong University for nine years, in the Linguistics Department at the University of Sydney for 25 years, and retired as a Professor from Hong Kong Baptist University after three years.

John has published widely in the field of language in the law, including Language and the Law (Longman, 1994), Forensic Linguistics: An Introduction to Language in the Justice System (Blackwell, 2003) and more than 20 papers on language and law issues.