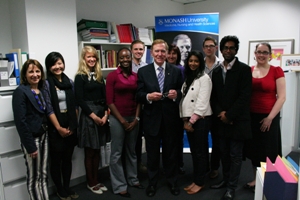 While the Kirby Centre has always accepted interns, in January 2011 the Centre offered its first round of internships for law and public health students to undertake a range of duties including academic research in the area of human rights and health. Out of a field of over 50 applicants, six outstanding interns spent eight weeks at the Centre through March to May 2011. Interns worked under the direction of current research staff performing both administrative and research tasks. Interns were selected not only based on academic merit and professional experience, but also on their strong commitment to improving the human rights and health of vulnerable groups, including sex workers; refugees; injecting drug users; men who have sex with men; and those living in resource poor settings throughout the world.

Interns from this first cohort gained valuable experience in research and academia while the Centre benefited from their hard work and the publicity that ensued from advertising the internship programme. Two interns from 2011 (Cassandra Van and Anatoli Shapiro) elected to stay on to continue their work within the Centre and are now employed as research assistants on their respective projects.

The Centre continues to recruit additional interns on an ad hoc basis, with new interns scheduled to begin work on projects in the coming months. The next formal call for interns will be made in 2013.

Nicholas Moodie
February 2011 – May 2011
One example of the exceptional quality of the Centre’s interns is the contribution of Nicholas Moodie. Mr Moodie undertook the enormous task of summarising the laws of Malaysia and Ethiopia as they affect sex workers, to enable researchers to analyse the impact of the laws on sex workers rights in these countries. The Ethiopian sex worker group provided feedback to indicate that they had not previously had access to such information.

Cassandra Van and Mihilini Fernando worked together at the Michael Kirby Centre investigating the economics of obesity in the Australian context. Their research contributed to a conference presentation entitled Australian Governments’ Contributions to Obesity, delivered by their supervisor, Brad Crammond, at the 41st Annual Public Health Association of Australia Conference, Brisbane, Australia, 26-28 September 2011.

Shortly after beginning at the Centre as an intern, Cassie was selected for a highly competitive internship in the Department of Mental Health and Substance Abuse at the WHO headquarters, Geneva, and subsequently completed her Masters of Public Health majoring in International Health. She now works as a research assistant on various projects at the Centre. Mihilini is currently on exchange in the Netherlands but will return in 2012 to begin as a graduate at a law firm. She hopes to specialize in environment law.

Emily Trevorrow joined the Kirby Centre as an intern in September 2012. Emily has been coordinating fundraising strategies, and contributing to various research projects. One such research project which Emily has significantly contributed to has been a review of the NIH and Fogarty International Centre-funded training programs in the Asia-Pacific region. Before joining the Centre, Emily completed an outstanding Masters dissertation examining indigenous disadvantage in Australia, arguing for the importance of self-determination. In recognition of this, she was awarded the 2012 Lynne Alice Prize for the student who achieved standards of excellence in their Human Rights specialisation.

Jenny Tran joined the Michael Kirby Centre as a marketing intern in Feb 2013. Jenny is active in volunteering and working with various not for profit organizations such as the Children’s Medical Research Institute and the Oaktree Foundation.