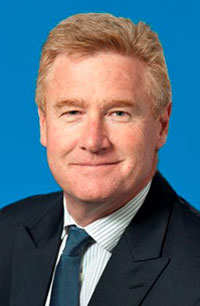 Professor Stephen Jane completed his medical degree at Monash University. He entered the physician training program at the Alfred, completing clinical/laboratory haematology and a PhD under Professor Hatem Salem, Director of the Australian Centre for Blood Diseases. He then spent five years in the United States of America, the first three as a postdoctoral fellow at the National Institutes of Health in Bethesda, and the remainder on the faculty at St Jude Children’s Research Hospital in Memphis, Tennessee. He returned to Australia in 1995 as a Wellcome Senior Research Fellow to the University of Melbourne at the Bone Marrow Research Laboratories in the Royal Melbourne Hospital. He became Director of the laboratories in 2000, a Principal Research Fellow of the NHMRC in 2005 and a Professor of Medicine at University of Melbourne in 2006.

Professor Jane was appointed as the Head of Central Clinical School, Professor of Medicine, Monash University and Director of Research for Alfred Hospital in 2011. He was made Foundation Dean of the new Sub-Faculty of Translational Medicine and Public Health at the Alfred Research Alliance precinct in 2019. He is a member of the Clinical Haematology Service.

Professor Jane has a range of research interests investigating both developmental and acquired disorders of the blood and skin in mouse models. At a basic level, this involves the study of gene transcription. He currently holds a number of NH&MRC and other competitive grants. He has published over 90 papers including articles in Science, Nature Medicine and Developmental Cell.

Professional and other memberships: