Exhibition, conference and concert in 2016

In September 2016, Monash hosted an interdisciplinary conference ‘International Conference and Cultural Event (ICCE) of Aceh 2016’ along with a series of Aceh-related events at the Caulfield and Clayton campuses.

The launch of the Exhibition ‘Keuneubah Endatu, Heritage of the Ancestors: A Treasury of Aceh’s Fine Arts’, was held in conjunction with the launch of the Conference which had the theme ‘Exploring Aceh’s Culture to Foster Sustainable Development’.

The exhibition comprised musical instruments, textiles, embroidered cushion covers, jewellery, wedding ornaments, traditional costumes, rare books, and books on the arts of Aceh from various ethno-lingual groups living in the province for centuries, including the Acehnese, the Gayo, the Banyak Islanders and the Tamiang Malay. Upper image: The Sikambang dance of the former Haloban palace on Tuangku Island in the Banyak Archipelago, off the coast of Singkil, southwest Aceh, Sumatra.

The event lasted 15 days and also included an exhibition of paintings by Acehnese-born painter Mahdi Abdullah, a festival of films by Acehnese film makers, and a concert of Acehnese music and dance by artists from the University of Syiah Kuala, Banda Aceh. 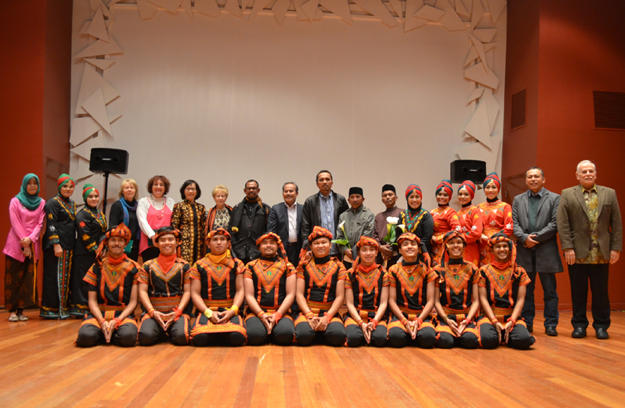 Saman Gayo and other performers from Aceh, with MAMU staff and guests in the Music Auditorium at the Sir Zelman Cowen School of Music.